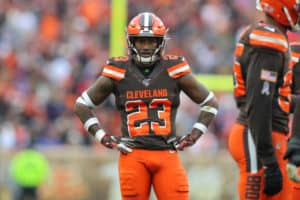 Going into this past Sunday’s game against the Pittsburgh Steelers, the Cleveland Browns had won three straight games. An underwhelming season full of drama was starting to turn, and the Browns were looking for their first four-game win streak since the end of the 2009-2010 season under Eric Mangini. However, the bigger story was Damarious Randall and a … END_OF_DOCUMENT_TOKEN_TO_BE_REPLACED