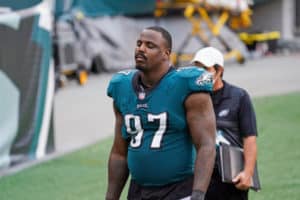 On March 19, the Cleveland Browns signed defensive tackle Malik Jackson to a one-year deal soon after the Philadelphia Eagles released him. With Jackson, the Browns added the following players in free agency: https://twitter.com/H_Grove/status/1373060525270110211 The 31-year-old Jackson is the first defensive lineman that the Browns have added this … END_OF_DOCUMENT_TOKEN_TO_BE_REPLACED

The Cleveland Browns have agreed to a one-year contract with veteran defensive tackle Malik Jackson, according to multiple media reports. The specific terms of Jackson’s deal are not known as of Friday night. The Philadelphia Eagles released Jackson, 31, earlier this week to clear salary-cap space. In 2021, the Browns are not scheduled to play the … END_OF_DOCUMENT_TOKEN_TO_BE_REPLACED