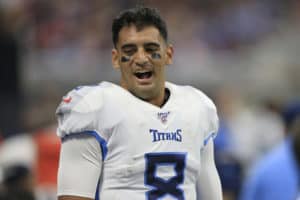 The Cleveland Browns had no competition in the quarterback room last season. Baker Mayfield had Drew Stanton and Garrett Gilbert behind him on the depth chart. Stanton was usually seen in sweatpants and Gilbert's claim to fame was success in the short-lived AAF and that he went to the same high school as … END_OF_DOCUMENT_TOKEN_TO_BE_REPLACED