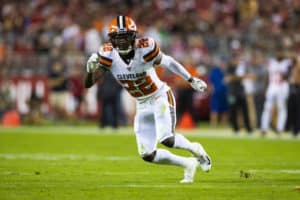 The Cleveland Browns have ruled out safety Eric Murray for Sunday’s game against the Pittsburgh Steelers. Murray hasn’t played since Week 8 against the New England Patriots due to a knee injury. The fourth-year safety did not practice Wednesday or Thursday. Shedrick Redwine has started in Murray’s place. The Browns listed the following players as … END_OF_DOCUMENT_TOKEN_TO_BE_REPLACED