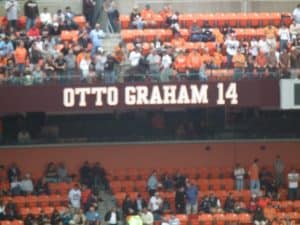 Younger NFL fans have a lot to say about the number of older-era players named to the NFL All-Time team. Especially at quarterback, it is easy to look at modern era statistics and believe those passers have it all over their older brethren. But if winning and championships determine greatness, no one can argue with Otto Graham’s selection. All Graham did was … END_OF_DOCUMENT_TOKEN_TO_BE_REPLACED