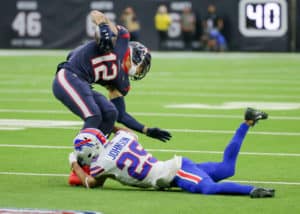 The Cleveland Browns continue to get bad news from training camp, and it's only the first week of practicing with pads. Today the news is about CB Kevin Johnson. The Browns released a statement saying that CB Kevin Johnson is in the hospital with a lacerated liver. "Kevin is resting comfortably and is expected to remain in the hospital for at least another 24 … END_OF_DOCUMENT_TOKEN_TO_BE_REPLACED

Earlier, it was reported that the Cleveland Browns were still looking to sign more defense in free agency.  According to ESPN's Adam Schefter, the Browns are signing former Bills' and Texan's CB Kevin Johnson.  Former Bills’ and Texans’ CB Kevin Johnson is signing a one-year, $3.5 million deal that could go up to $6 million on incentives with the … END_OF_DOCUMENT_TOKEN_TO_BE_REPLACED