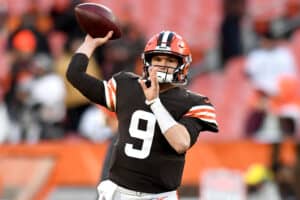 The broadcast team on Monday evening’s Browns game said it best in regards to Nick Mullens. Expectations were for him to not lose Cleveland the game with his performance. As the broadcast pointed out, he exceeded that bar despite the loss to Las Vegas. https://twitter.com/UrinatingTree/status/1473092244479660040 With a win, Mullens would forever be a part … END_OF_DOCUMENT_TOKEN_TO_BE_REPLACED