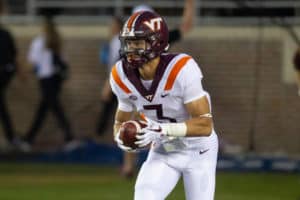 The month of April in the NFL is also heavily draft-focused. Front offices have dozens of names to sort through and evaluate with the majority of those reports becoming irrelevant after May 1st. While defensive end has been a highly discussed position for the Cleveland Browns to look at with their first-round pick, other options remain. Caleb Farley, a … END_OF_DOCUMENT_TOKEN_TO_BE_REPLACED