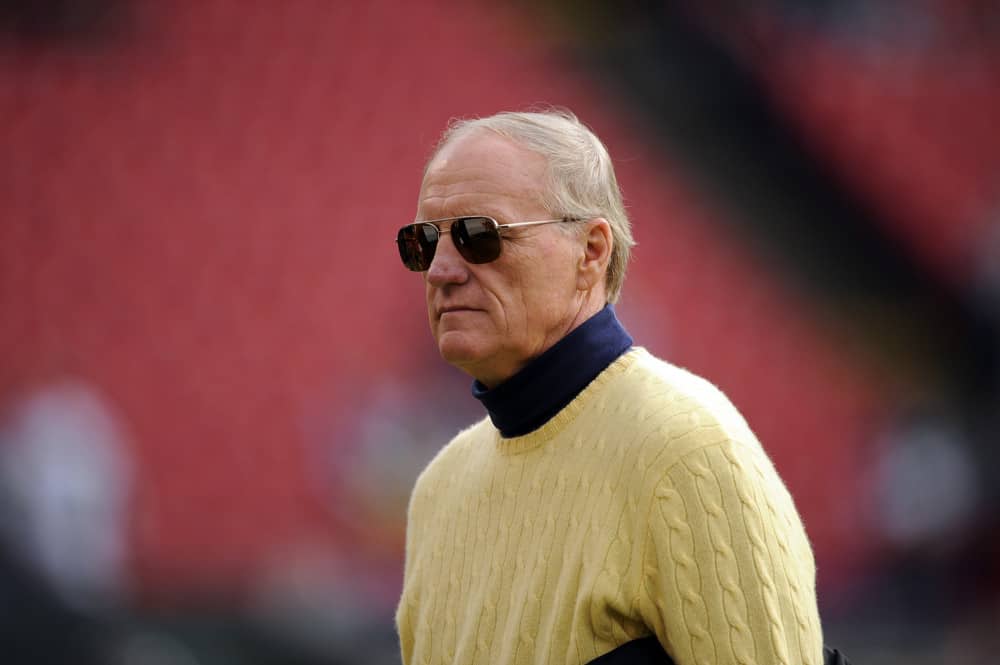 He was moved to a facility near his home in Charlotte, North Carolina due to complications with Alzheimer’s Disease.

Schottenheimer’s wife, Pat, released a statement on February 3, 2021 updating everyone on Marty’s condition.

“As a family, we are surrounding him with love and are soaking up the prayers and support from all those he impacted through his incredible life. In the way he taught us all, we are putting one foot in front of the other … one play at a time.”

A message from the family of Marty Schottenheimer, updating his health condition. pic.twitter.com/FzQzpQVxaD

Coach Schottenheimer was diagnosed with Alzheimer’s Disease in 2014.

Since that time, he has largely been out of the public eye.

This feature by ⁦⁦⁦@MichelleBeisner⁩ in 2017 on Marty Schottenheimer revealed the reality of his Alzheimer’s struggle, a little tough to watch but moving to see a love so true.
Thinking of Pat and Marty a lot today.
-via @ESPN App https://t.co/dwkrKYl7io

His wife of over 50 years, Pat, has been his primary caregiver.

The couple has two children; a daughter, Kristen, and a son, Brian who served as the offensive coordinator of the Seattle Seahawks this past season.

(Brian will be moving on to Jacksonville to work under Urban Meyer as the passing game coordinator and quarterbacks coach.)

Like other families dealing with a loved one’s Alzheimer’s diagnosis, Schottenheimer’s family has shared that there are good days and bad days.

“For a family like us, the immediate response is to fight and win. We learned more and more about the disease that you don’t fight and win you just have to finish…The grandchildren spend as much time as they can with him. There’s been an evolution from not understanding why Papa is the way he is to absolutely nurturing him and taking care of him in an incredible way that makes you proud as a parent.”

He returned to coaching in the NFL in 1975 with the New York Giants as the linebackers coach.

After stints with the Giants and Lions, Schottenheimer arrived in Cleveland in 1980 and served as defensive coordinator from 1980-1984 before serving as head coach from 1984-1988.

Under Schottenheimer, the Browns won three AFC Central titles and appeared in two consecutive AFC Championship games during the 1986 and 1987 seasons.

Both AFC Championship games resulted in losses against the Denver Broncos.

Schottenheimer went on to coach ten seasons for the Kansas City Chiefs, spent time in the broadcasting booth, and returned to coach the Washington Redskins and San Diego Chargers.

Over his career he recorded 205 wins, 126 losses, and 1 tie; he also took the Chiefs to the AFC Championship in 1993 (losing to the Buffalo Bills).

Sad news: Marty Schottenheimer, 77, who has been battling Alzheimer’s disease since 2014, has been moved into a hospice facility in North Carolina. He should be remembered for more than never getting to the Super Bowl. He truly cared about his players. #Browns #Chiefs #Chargers

Schottenheimer’s legacy was discussed just a few weeks ago before two of his former teams, the Browns and Chiefs, met in an AFC divisional playoff game.

Our Prayers R With U Coach Marty 🙏🏼 pic.twitter.com/NkDSElqPBD

“Practices were actually harder than the games, the two-a-day, the three-a-day practices, the amount of contact that you went through for practice actually made Sunday not as tough going against other teams…For him to put the structure, organization together for two organizations that weren’t winning football games and winning playoff games before he got there to put those two teams and those two organizations together within a decade to get to multiple AFC Conference Championship games is absolutely not an easy feat to do.”