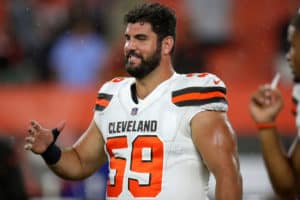 Journeyman center Anthony Fabiano is back with the Cleveland Browns as the team's backup center to JC Tretter. https://twitter.com/TonyGrossi/status/1346934738611744771 The Browns announced that they signed him and activated linebacker B.J. Goodson. The injuries to the offensive line forced the Browns to bring Fabiano back for his third stint in his … END_OF_DOCUMENT_TOKEN_TO_BE_REPLACED