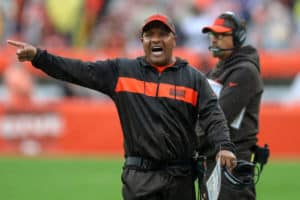 If anyone had “late-March Hue Jackson drama” on their Bingo card, congratulations. The former Cleveland Browns head coach made a small splash on social media last week when he talked about how members of the Browns ownership group would be “held accountable” eventually. This was sparked by memories of the Browns-Bengals trade mishap involving AJ McCarron a few … END_OF_DOCUMENT_TOKEN_TO_BE_REPLACED 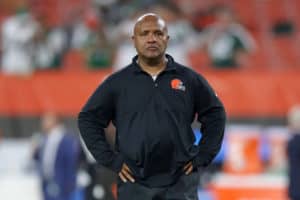 Dread it. Run from it. Destiny still arrives. The words of Thanos in The Avengers: Infinity War have become iconic since gracing theaters around the world. Who knew Thanos was talking about Cleveland Browns fans’ “destiny” being former head coach Hue Jackson? https://twitter.com/huejack10/status/1375080223801176067 Okay “destiny” may be a bit … END_OF_DOCUMENT_TOKEN_TO_BE_REPLACED

Turns out going 3-36-1 with a team as their head coach, including a winless season, doesn’t go over to well with that fan base. That seems like the kind of things that people will try and hold over your head for a long, long time. Don’t tell Hue Jackson that though. Jackson spent two and a half years with the Cleveland Browns from 2016 to 2018. Things, … END_OF_DOCUMENT_TOKEN_TO_BE_REPLACED