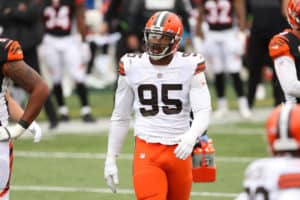 Cleveland Browns defensive end Myles Garrett's status for Week 4 is still uncertain following his single-car accident after the team's practice last Monday. The team released an update, saying that the three-time All-Pro suffered a shoulder sprain, biceps strain, minor lacerations, bumps, and bruises. It's a bit of good news, though, that he did not suffer from … END_OF_DOCUMENT_TOKEN_TO_BE_REPLACED 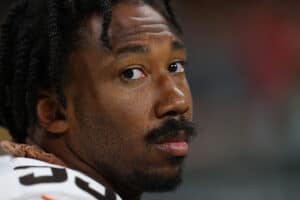 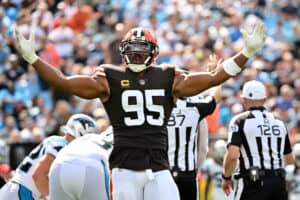 The Cleveland Browns have started the new NFL season off the right way by earning a 26-24 win on Sunday over the Carolina Panthers, not to mention their old quarterback, Baker Mayfield. It wasn't the prettiest of wins, but the formula of winning with defense and the running game while Deshaun Watson is out could be taking shape. Nick Chubb had a monster day with … END_OF_DOCUMENT_TOKEN_TO_BE_REPLACED

It's not exactly a secret that Baker Mayfield didn't leave the Cleveland Browns on the best of terms this summer. He had his high moments over the last four years, but in the end, things were on the downturn by the time the 2021 season was completed. Things seemed to come to a head when he asked to be traded after someone in the Browns front office was quoted as … END_OF_DOCUMENT_TOKEN_TO_BE_REPLACED

Quarterback Baker Mayfield's tenure with the Cleveland Browns didn't end on a good note, despite bursts of excellent play during his four seasons with the team. After someone in the organization reportedly said the team would prefer "an adult" under center, Mayfield asked for a trade, and months later, he was sent to the Carolina Panthers. Upon joining his new … END_OF_DOCUMENT_TOKEN_TO_BE_REPLACED