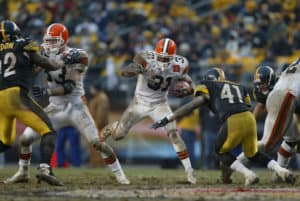 In his 40 years of life, former Cleveland Browns running back William Green has seen extreme highs and lows on and off the field. William Green grew up in Atlantic City, New Jersey. He was one of 5 kids who tragically lost both their parents in the span of 16 months. William was orphaned before he turned 14. His parents both died from AIDS before he … END_OF_DOCUMENT_TOKEN_TO_BE_REPLACED