You are here: Home / Browns History / The Life And Career Of Andra Davis (Complete Story)

While interceptions, fumble recoveries, and sacks are the “sexy” statistics on defense, there is no more basic aspect to playing defense in the NFL than tackling.

To be an effective defensive player, you must make tackles to cause losses, stop drives, and prevent points.

One of the best tacklers in Cleveland Browns history was linebacker Andra Davis.

Over his seven seasons with Cleveland from 2002 to 2008, Davis had 90 or more combined solo and assisted tackles in four seasons and five or more tackles for losses in five seasons.

We take a look at the life of Andra Davis – before, during, and after his NFL playing career.

Live Oak is located in northern Florida, east of Tallahassee and west of Jacksonville.

When Davis grew up there, Live Oak had a population of approximately 6,000 to 7,000 people.

At Suwannee High School, Davis was a three-year starter on the football team.

He played linebacker and fullback.

In 1995, Davis was named second-team Florida Class 4A All-State.

As a senior in 1996, although he played in just seven games because of injury, Davis made 105 total tackles, with seven sacks, and rushed for 751 yards and four touchdowns.

Davis was named first-team Florida Class 4A All-State in 1996.

Davis also captained both the football team and the basketball team at Suwannee High School.

While Davis was heavily recruited by colleges both in Florida and out of Florida (such as Georgia Tech and Syracuse), he ultimately decided to attend University of Florida.

“I was really liking Georgia Tech at one point but I knew I wanted to stay in the state of Florida. . . . [Florida head coach Steve] Spurrier came to my house he told me Florida has a great education, you will play on television every Saturday while competing for championships, and have a chance to go to the NFL all while being close to home. . . . I pretty much always leaned towards Florida growing up. I have always been a gator fan so when the opportunity came I jumped right on it.”

In 1997, Davis leaded to Gainesville, Florida to attend University of Florida for college.

After redshirting in 1997, Davis played on defense and on special teams for Florida in 1998.

He made 20 tackles (two for losses) and had one forced fumble.

Davis contributed to Florida posting a 10-2 record and being ranked fifth in the nation in the final Associated Press poll for the 1998 season.

In 1999, Davis became a starting middle linebacker for the Gators.

The Gators were ranked 12th in the nation in the final Associated Press poll for the 1999 season.

In the opening game of the 2000 season, Davis suffered a knee injury and missed the rest of the season.

Davis returned in 2001 and had an excellent season.

In a 54-17 Gators win over South Carolina (then ranked 14th in the nation by the Associated Press) on November 10, 2001, Davis made 16 tackles, including one tackle for loss, and had one forced hurry of an opponent pass.

For his play, Davis was named SEC Defensive Player of the Week.

In addition, he made eight tackles for losses, and had one interception, two fumble recoveries, one forced fumble, and two forced hurries of opponent passes.

Davis achieved these statistics despite fracturing his right hand in a game in October.

After the injury, Davis said:

“I’m not sure when it happened, and I didn’t pay it much attention. I missed all last season. As long as I’ve got two legs, there’s no way I’m going to miss a minute of this one.”

Davis also was a semifinalist for the Butkus Award (given to the nation’s best college linebacker).

“Andra’s being back makes all the difference. He’s unbelievably well prepared and makes sure everyone else is, too. . . . Andra’s not the fastest guy on the clock. The stuff that he plays with is all inside.”

“Andra’s always three steps ahead of the offense. He’s the one getting people where they need to be. . . . Dre’s going crazy. He’s the best linebacker in the country, and if he continues playing like he’s playing, people will start realizing that.”

Florida was ranked third in the nation in the final Associated Press poll for the 2001 season.

While at Florida, Davis majored in Recreation Program Delivery.

After his time as a member of the Gators, Davis headed to the NFL. 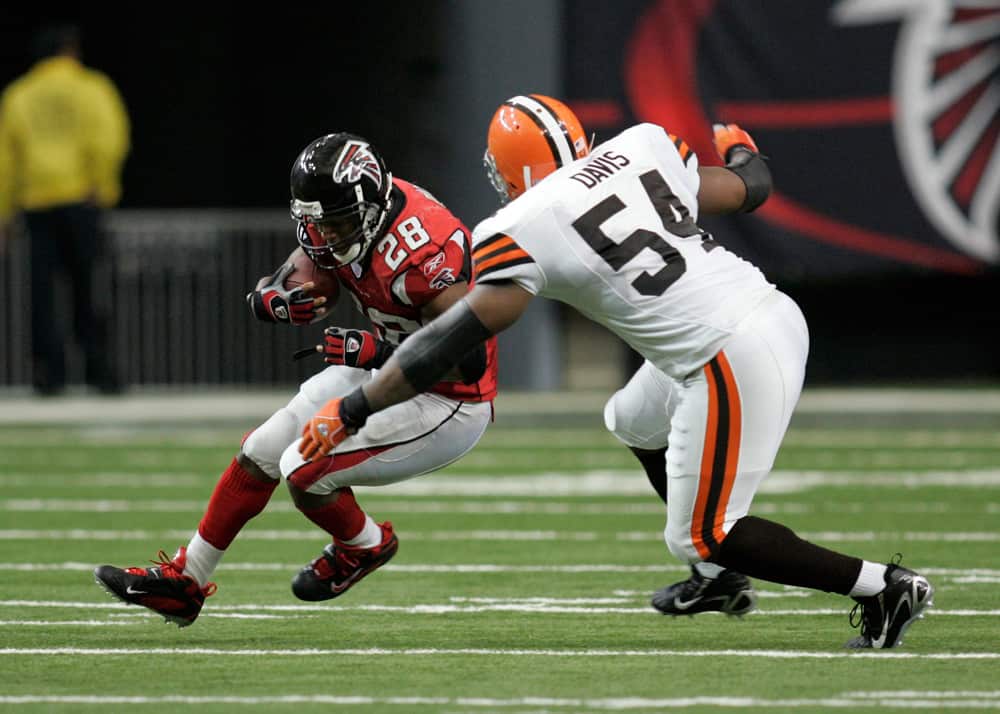 The Cleveland Browns drafted Davis in the fifth round of the 2002 NFL draft; he was the 141st overall pick.

Davis was disappointed with his draft position.

As a rookie in 2002, Davis (playing at a height of six feet and one inch and at a weight of 255 pounds) played in all 16, but did not start any, regular season games.

In a 16-13 Browns loss to the Pittsburgh Steelers in overtime on September 29, 2002, Davis had his first NFL regular season interception, as he intercepted Pittsburgh quarterback Tommy Maddox.

Davis had his first NFL regular season fumble recovery, as he recovered a muffed punt by New Orleans Saints punt returner Michael Lewis, in a 24-15 Cleveland victory over New Orleans on November 24, 2002.

For the 2002 regular season, Davis made 17 solo tackles and seven assisted tackles (in addition to having the above-described interception, fumble recovery, and pass defense).

Cleveland had a 9-7 record in 2002 and earned a wildcard playoff berth.

Davis played in the game, but the Browns lost to Pittsburgh 36-33.

“[Davis is] starting to show up now. He is making plays. He’s a big, strong, athletic guy who fits the position.”

On September 7, 2003, in his first regular season start at middle linebacker, Davis made eight solo tackles, as Cleveland lost to the Indianapolis Colts 9-6.

For the 2003 regular season, Davis made 98 solo tackles and 40 assisted tackles, including six tackles for losses, and had six pass defenses (in addition to having the above-described five sacks and two forced fumbles).

In 2003, Davis was named the “Joe Thomas Award” Player of the Year winner by the Pro Football Writers of America.

In 2004, Davis played in and started 11 regular season games at middle linebacker.

Davis missed the last five games of the 2004 regular season with a knee injury.

Davis made 53 solo tackles and 18 assisted tackles, including two tackles for losses, and had one fumble recovery, one-half of a sack, and six pass defenses, in the 2004 regular season.

Davis started all 16 regular season games at inside linebacker in 2005.

Davis was named AFC Defensive Player of the Week for his performance in a 22-0 Browns shutout of the Miami Dolphins on November 20, 2005.

On December 15, 2005, Davis signed a five-year contract extension with the Browns.

“We are pleased to have Andra back. We feel he is a key piece in our defense and will continue to be as we build toward the future.”

In the 2005 regular season, Davis made 89 solo tackles and 60 assisted tackles, including nine tackles for losses, and had two sacks and six pass defenses (in addition to having the above-described interception).

His 149 combined tackles ranked fifth in the NFL.

Throwback Thursday! And you do you know what that means??? We dig into the archives… Today we highlight LB Andra Davis (2002-2008) His best season was in 2005, accounting for 149 total tackles. Do you remember??? #browns #nfl #andradavis #tbt #dawgpound #history #themoreyouknow pic.twitter.com/MHeK8pr48i

In 2006, Davis played in and started 14 regular season games at inside linebacker.

With Davis at inside linebacker, the Browns defense ranked in the 2006 NFL regular season tied for tenth in defensive interceptions (18).

In 2007, Davis played in all 16, and started 10, regular season games at inside linebacker.

In the 2007 regular season, Davis made 51 solo tackles and 16 assisted tackles, including five tackles for losses, and had one forced fumble, four pass defenses, and two “quarterback hits”.

Davis started all 16 regular season games at inside linebacker in 2008.

For the 2008 regular season, Davis made 62 solo tackles and 28 assisted tackles, including six tackles for losses, and had three pass defenses and one “quarterback hit” (in addition to having the above-described interception).

Cleveland had a 4-12 record in 2008. Davis helped the Browns defense rank in the 2008 NFL regular season tied for third in recovered turnovers (31) and second in defensive interceptions (23).

On March 2, 2009, Davis signed as a free agent with the Denver Broncos.

In 2009, Davis played in all 16, and started 13, regular season games for Denver at inside linebacker.

He made 67 solo tackles and 23 assisted tackles, including 14 tackles for losses, and had three-and-a-half sacks, three pass defenses, and six “quarterback hits”.

Davis then signed as a free agent with the Buffalo Bills on March 16, 2010.

In 2010, playing in six, and starting four, regular season games for Buffalo, Davis made 18 solo tackles and 23 assisted tackles, including one tackle for loss, and had one interception (which he returned for 11 yards), one forced fumble, and one pass defense.

Davis, in 2011, played in all 16, and started three, regular season games and made six solo tackles and eight assisted tackles, including one tackle for loss.

2011 was Davis’ last season playing in the NFL.

Davis married Monique; they had known each other since the 10th grade.

He has three daughters, Alisha, Amber, and Andrea.

When at Florida, Davis never completed his degree.

After his NFL career was over, Davis graduated from the University of Nevada, Las Vegas with a bachelor’s degree in social sciences in 2012.

In describing his company, Davis said:

“I do a lot of mentoring and public speaking. Just giving back to the kids. To motivate them to do better than I did. AllRoadsOpen.org. It’s a non-profit organization; we do a lot of community service and giving back.”

At first glance, it may be easy to overlook Davis’ seven-year career with the Browns from 2002 to 2008.

However, this analysis ignores Davis’ production on the field, especially as a tackler.

“Them drafting me out of college and taking a chance on me, my time in Cleveland was absolutely amazing. When I was drafted I didn’t know very much about the team, but being able to learn and understand the tradition, it was an honor to play for such a storied franchise. . . . For me to work my way up and become a household name in Cleveland, I wish I could have finished my career there, but it was just great, a great time for me, and I loved everything about being in Cleveland.”

Just as Andra Davis appreciates his time in Cleveland, Browns fans should appreciate the seven years of solid tackling and other production by Davis as a linebacker for the Browns.

Nick Chubb: “Cleveland Is Where I Want To Be”