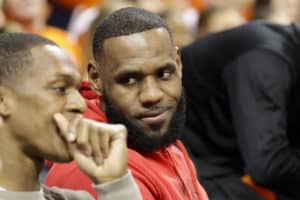 As a native northeast Ohioan, it’s been fun following the Cleveland Browns fandom of LeBron James across social media. https://twitter.com/KingJames/status/1333115588697231362 https://twitter.com/KingJames/status/1333158478219681792 LeBron is admittedly a childhood Dallas Cowboys fan, but he’s been welcomed aboard the Browns bandwagon by most. With fandom … END_OF_DOCUMENT_TOKEN_TO_BE_REPLACED

On Wednesday, Houston Rockets guard Austin Rivers had his father Doc Rivers on his podcast, Go Off with Austin Rivers. The elder Rivers, a future Basketball Hall of Famer, has coached against LeBron for the majority of his NBA career. He thinks that King James, who is one of the best NBA players of all-time, would also be the NFL's best player. Austin Rivers … END_OF_DOCUMENT_TOKEN_TO_BE_REPLACED