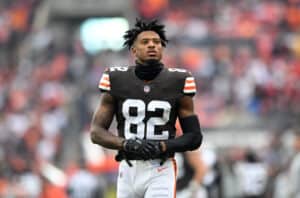 North Carolina is the new Hollywood. On Wednesday, the Carolina Panthers announced the signing of former Cleveland Browns wide receiver Rashard Higgins. Per multiple sources, it is a one-year deal for "Hollywood" Higgins with the Panthers. https://twitter.com/Jake_Trotter/status/1504171190503550989 The Higgins drama in Cleveland has finally ended. From … END_OF_DOCUMENT_TOKEN_TO_BE_REPLACED

After a disappointing 2021 Cleveland Browns season, the team may need to change things up. Let us take a look at Rashard Higgins' season and why the Browns should move on from him. In 2016, the Browns took Higgins with the No. 172 pick (fifth round) in the 2016 NFL Draft. Higgins, who played tremendously at Colorado State, also paved the way for Michael … END_OF_DOCUMENT_TOKEN_TO_BE_REPLACED 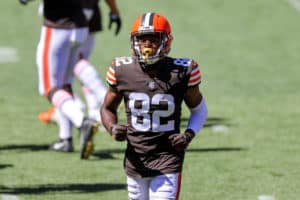 It was very unexpected to see Browns sixth-year wide receiver Rashard Higgins play just four snaps during Sunday's 33-29 loss to the Kansas City Chiefs: https://twitter.com/KevinColePFF/status/1437428049981710338 Baker Mayfield targeted nine different Browns on Sunday, and none of them were Higgins. It is a shock that Kevin Stefanski did not want to get … END_OF_DOCUMENT_TOKEN_TO_BE_REPLACED 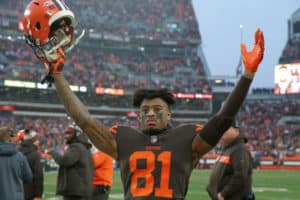 It appears the Cleveland Browns will keep wide receiver Rashard “Hollywood” Higgins for another season, an unnamed source told the NFL Network’s Ian Rapoport. Higgins, 26, is expected to sign a one-year deal with the Browns. An unnamed source told ESPN’s Jake Trotter that Higgins’ deal is for $2.38 million and is fully guaranteed. ESPN’s Josina Anderson … END_OF_DOCUMENT_TOKEN_TO_BE_REPLACED 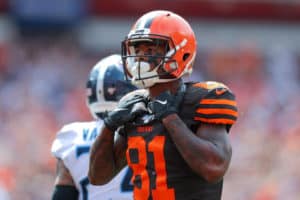 What’s Hollywood without the drama? Rashard Higgins, the Browns wideout known as “Hollywood”, has had plenty of drama attached to his name this offseason. As an unrestricted free agent, Higgins has been evaluating his value in the market. NFL reporter Josina Anderson now claims Higgins continues to weigh his options while Cleveland has no intentions on moving … END_OF_DOCUMENT_TOKEN_TO_BE_REPLACED