You are here: Home / Browns History / The Life And Career Of Tony Jones (Complete Story) 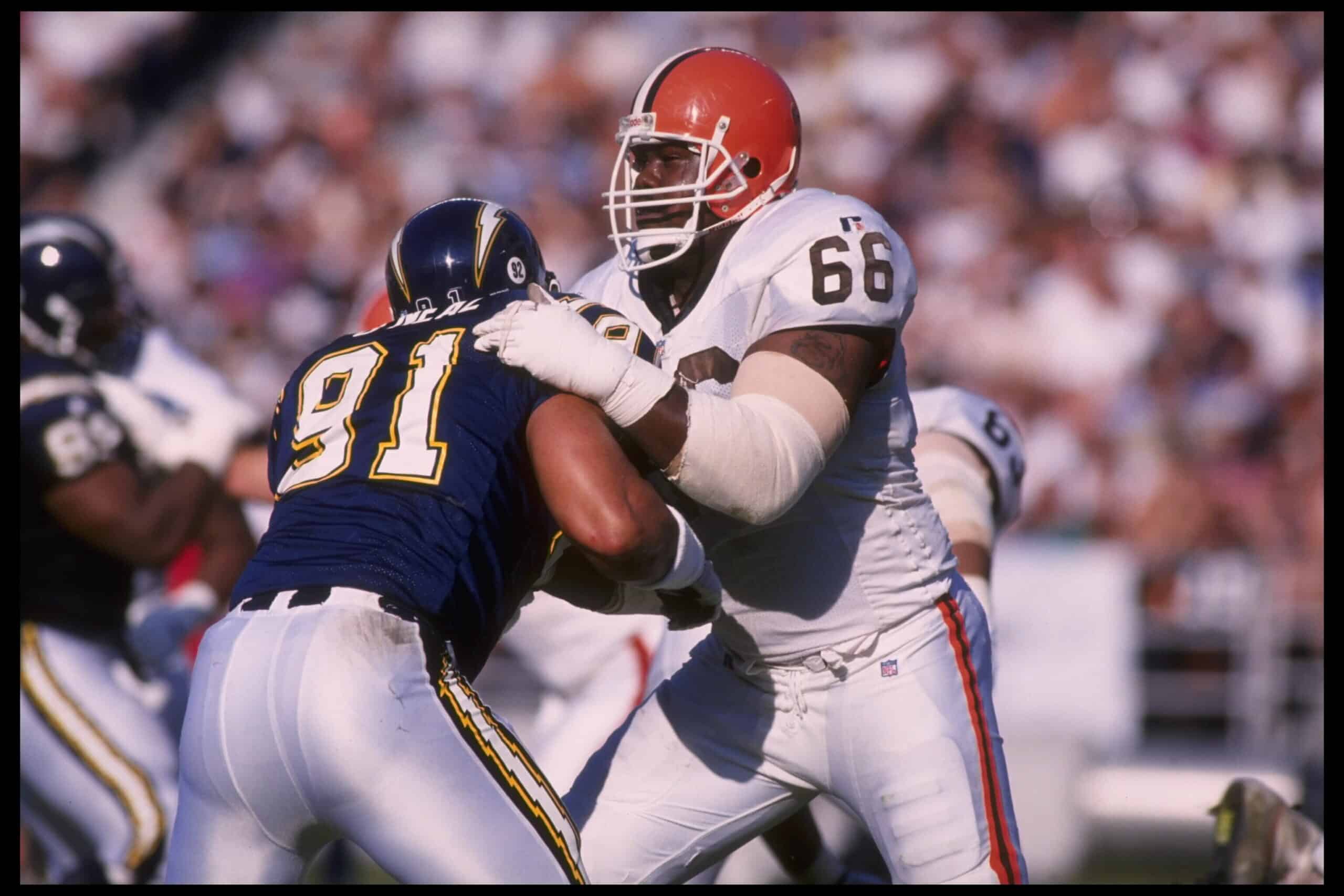 When people think of NFL free agency, they may just consider the signing of veteran free agents, generally before the NFL draft.

However, there is another type of free agency in the NFL that occurs after the NFL draft – the signing of undrafted, rookie free agents.

One of the best undrafted, rookie free agents signed by the Cleveland Browns was offensive lineman Tony Jones.

He was a durable and versatile (playing left tackle, right tackle, and right guard) lineman, whose play helped other offensive players and the Browns team be more successful.

We’re saddened by the passing of Tony Jones, who spent the first 8 of his 13 memorable NFL seasons in Cleveland. Our love and thoughts are with the Jones family.

We take a look at the life of Tony Jones – before, during, and after his NFL playing career.

Royston is located in northeastern Georgia.

When Jones grew up there, Royston had a population of approximately 2,500 people.

Carnesville is about 11 miles from Royston.

At tackle, Jones lettered in football at Western Carolina from 1984 to 1987.

When Jones played there, Western Carolina was in the Southern Conference, as part of NCAA Division !-AA.

After playing at Western Carolina, Jones headed to the NFL to play professional football.

Jones was invited to the NFL combine before the 1988 NFL draft.

While Jones went undrafted in the 1988 NFL draft, he was signed by the Cleveland Browns as a free agent.

As a rookie in 1988, Jones (playing at a height of six feet and five inches and at a weight of 290 pounds) saw limited action for Cleveland.

He played in four, and did not start any, regular season games.

Jones played in, but did not start, the game, as the Browns lost to the Oilers 24-23.

In 1989, Jones saw more action, as he played in nine, and started three, regular season games.

The following week, on December 17, 1989, with Jones starting at right guard, Bernie Kosar passed for 254 yards and two touchdowns and Browns receiver Reggie Langhorne caught six passes for 140 yards and one touchdown, as Cleveland defeated the Minnesota Vikings 23-17 in overtime.

In the next game, on December 23, 1989, Jones started for the third consecutive week and helped Cleveland’s offense gain 324 total yards, in a 24-20 Browns win over the Houston Oilers.

With the win over Houston, Cleveland won the AFC Central Division title in 1989, with a 9-6-1 record.

Jones contributed to the Browns ranking in the 1989 NFL regular season tied for eighth in fewest sacks allowed (34).

Jones continued to start at right guard, with his play helping Bernie Kosar pass for 251 yards and three touchdowns and Webster Slaughter catch three passes for 114 yards and two touchdowns, as Cleveland defeated the Buffalo Bills 34-30.

Cleveland then advanced to play the Denver Broncos in the AFC Championship game on January 14, 1990.

Jones again started the game, but the Browns lost to Denver 37-21.

In 1990, Jones became a full-time starter for Cleveland, moving from right guard to right tackle and starting all 16 regular season games.

Jones remained a full-time starter in 1991, as he again started all 16 regular season games.

Jones helped Cleveland rank in the 1991 NFL regular season ninth in passing yards (3,304) and tied for tenth in passing touchdowns (19).

Jones helped Browns wide receiver Michael Jackson catch five passes for 105 yards and one touchdown in a 23-13 Cleveland victory over the San Francisco 49ers on September 13, 1993.

Jones helped the Browns rank in the 1993 NFL regular season tied for fifth in passing touchdowns (23) and tied for tenth in average yards per rushing attempt (4.0).

In the 1994 playoffs, the Browns first played the New England Patriots on January 1, 1995.

Cleveland advanced to play the Pittsburgh Steelers on January 7, 1995.

Jones again started the game at left tackle, but the Browns lost to Pittsburgh 29-9.

The most important story of Cleveland’s 1995 season was the decision by Browns owner Art Modell to relocate the Browns franchise to Baltimore for the 1996 season.

He was not happy to leave Cleveland.

“We left one of the greatest football cities in the world in Cleveland . . . The Dawg Pound was probably the biggest thing in football. I was telling some of the younger guys on our team, I’ve never seen a better group of fans than the Dawg Pound. . . . Those guys were a big part of our team. They supported us through the good seasons and the bad.”

He played in and started 15 regular season games at left tackle for Baltimore in 1996.

On February 14, 1997, the Ravens traded Jones to the Denver Broncos in exchange for a second-round draft pick in the 1997 NFL draft.

“Tony Jones has been a major part of the Cleveland Browns and then the Baltimore Ravens. He has been a solid player and great family man. I wish him nothing but the best.”

In 1997, Jones started all 16 regular season games for Denver.

He once again shifted positions, playing right tackle for the Broncos in 1997.

Jones switched positions for the fifth time in his professional football career, moving from right tackle back to left tackle, in 1998.

He started all 16 regular season games at left tackle in 1998.

In 1999, at left tackle, Jones played in and started 12 regular season games.

Jones started all 16 regular season games at left tackle in 2000.

The loss to the Ravens turned out to be Jones’ final NFL game, as he retired after the 2000 season.

The Years After The NFL

He had three children.

After his NFL retirement, Jones invested in various businesses, including restaurants, shopping malls, and a barbershop.

It has been said about Jones:

“Tony loved mentoring kids in the community. It was important to him to make a difference in the kids he encountered. He would take the time to speak at schools, camps and special youth events. Tony often spent time training college and NFL prospects or kids who desired the same dream as he did as a child. He coached youth football and pushed kids to their highest potential. Tony is highly respected by many.”

In his birthplace of Royston, Georgia, both a street (“Tony Jones Street”) and a park (“Tony Jones Park”) have been dedicated to Jones.

As a charter member, Jones was inducted into the Franklin County Sports Hall of Fame in 1998.

He also was named by “Pro Football Reference” to the second team All-Decade Team for the 1990’s.

It is always difficult to review the career of an offensive lineman because there is limited direct statistical information about his performance.

Nevertheless, four points can be made about Jones’ NFL career.

First, Jones was a durable player.

With the Browns, from when Jones first started in an NFL regular season game (on December 10, 1989), he started 103 consecutive regular season and playoff games.

Second, Jones was a versatile player.

He performed well at each of left tackle, right tackle, and right guard.

With the Browns, Jones played on three playoff teams.

Most notably, in 1994, Jones was the starting left tackle on Cleveland’s offensive line, which led the NFL in allowing the fewest sacks.

In addition, the 1994 Browns team was the last Cleveland team both to win at least 11 regular season games and to win a playoff game for 26 years (until the 2020 Browns).

After he left the Browns, Jones also started on the offensive line for two Super Bowl-winning Broncos teams in 1997 and 1998.

Reflecting on his NFL career, in 1999, Jones stated:

“Nothing has even been given to me. I’ve always been the guy to outwork somebody else, the guy who wasn’t drafted and had to bust his butt to make the team. Then when I started, I had to bust my butt to keep it.”

From Lou Groza to Joe Thomas, the Browns have a long tradition of excellent offensive linemen.

Tony “T-Bone” Jones fits well in this tradition, helping Cleveland players and the Cleveland team be more successful over his eight seasons with the Browns. 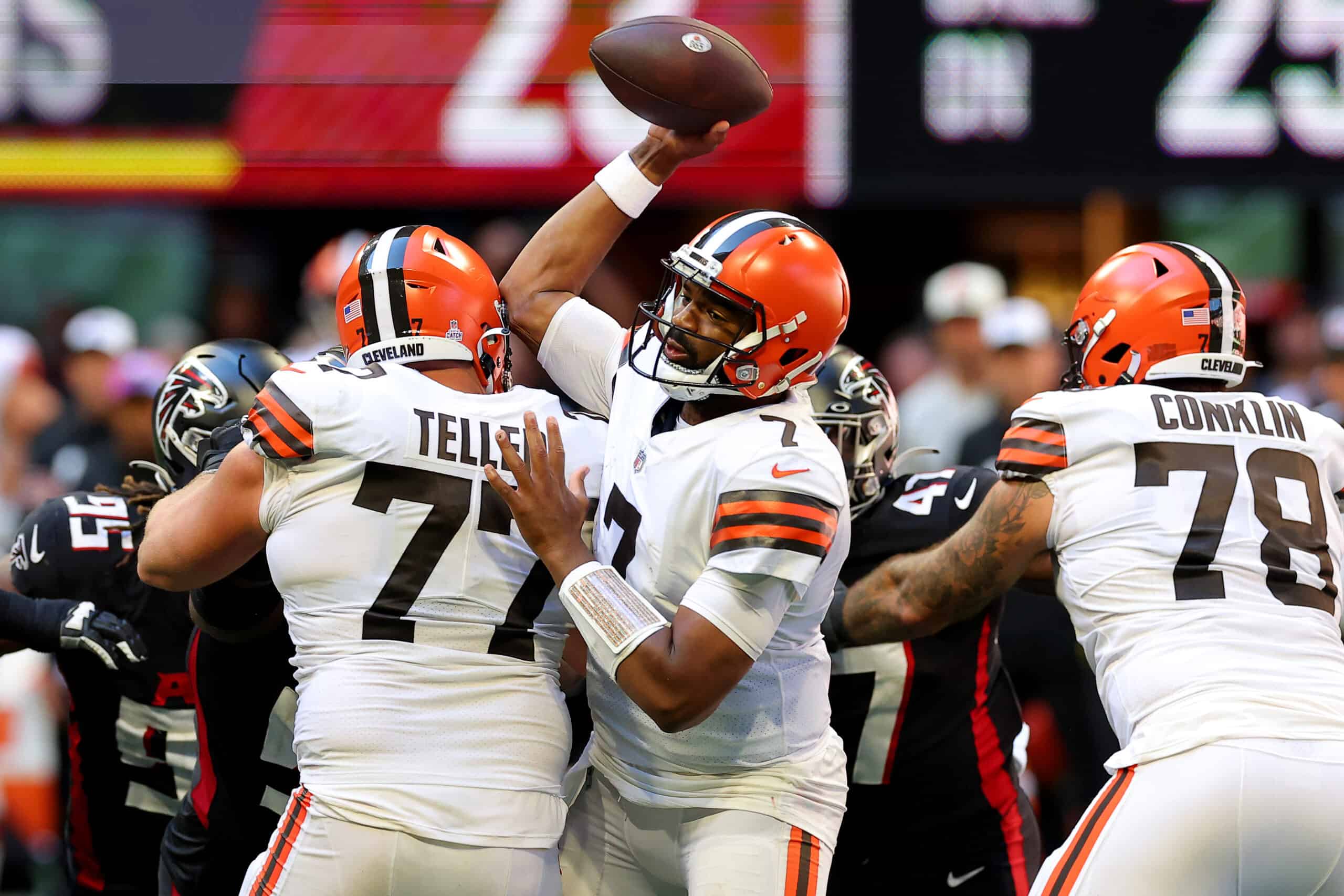 The Life And Career Of Homer Jones (Complete Story)