You are here: Home / Browns History / The Life And Career Of WR Michael Jackson (Complete Story) 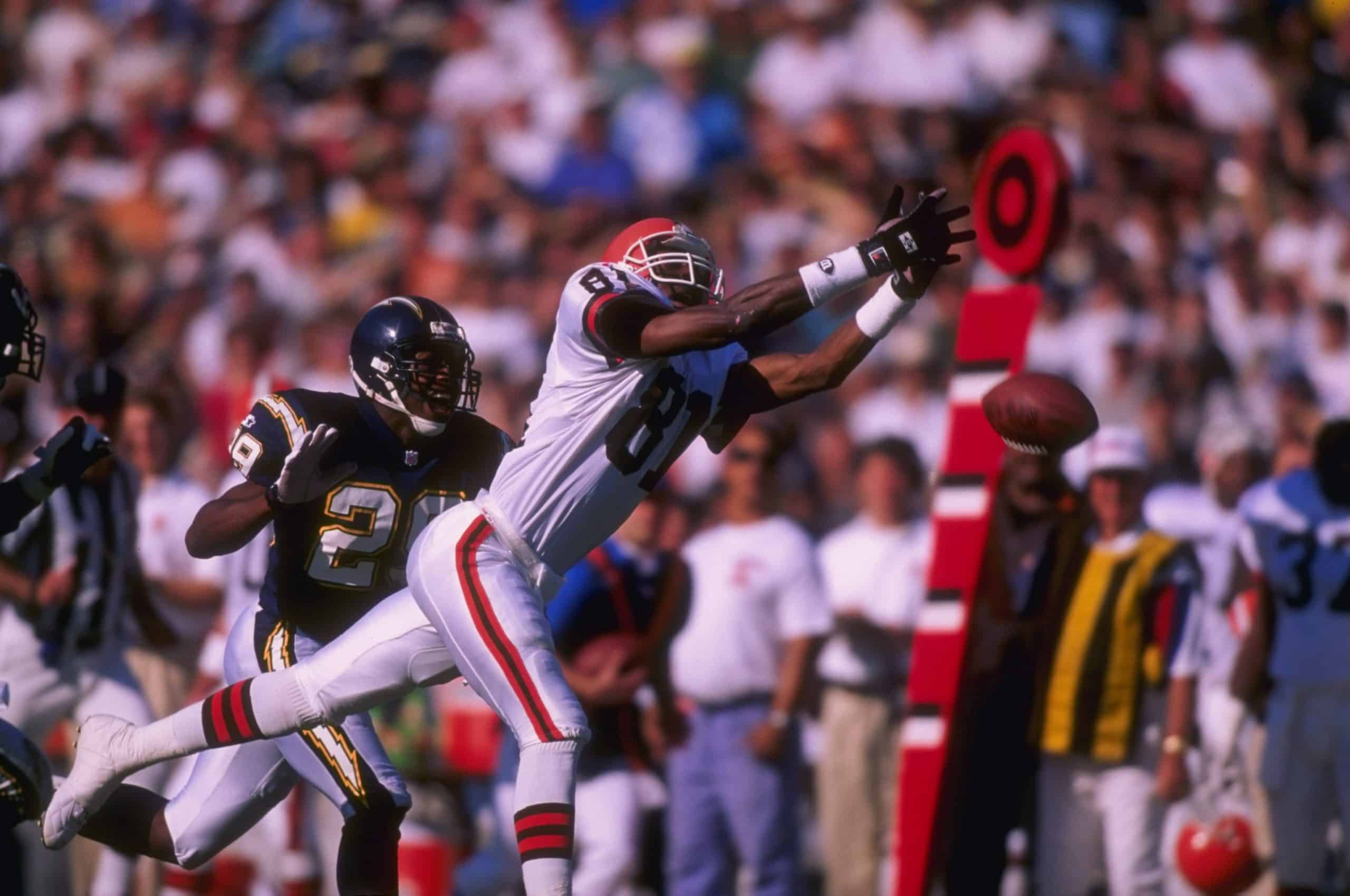 Pro Football Hall of Fame Cleveland Browns tight end Ozzie Newsome continued to contribute to the Browns as a scout and as an executive after his retirement as a player.

As a scout, one of Newsome’s achievements was helping Cleveland decide to draft Michael Jackson in 1991.

Over his five seasons with the Browns, Jackson was a solid wide receiver for Cleveland.

In 71 regular season and playoff games with the Browns, Jackson caught 180 passes for 2,966 yards and 28 touchdowns.

Michael Jackson was more than a great player, he was a great man.

Our thoughts are with his family and friends. Rest in peace. pic.twitter.com/2OdcrjjahT

We take a look at the life of Michael Jackson – before, during, and after his NFL playing career.

Tangipahoa is in southeastern Louisiana (about 85 miles from New Orleans), near the border with Misssissippi.

When Jackson grew up there, Tangipahoa had a population of approximately 500 people.

Kentwood is about five miles north of Tangipahoa.

Jackson made the All-State team.

He also was Most Valuable Player of the All-Star game.

“Southern Miss brought me in as a quarterback, and they brought Brett in as a strong safety, yet he was given the opportunity to play quarterback in our freshman year. Our senior quarterback got injured, and Brett got the first opportunity to go into the game, and it was history from there. That’s when in my sophomore year I moved to wide receiver.”

In 1988, Jackson, whose play was affected by an injured knee, caught four passes for 70 yards and one touchdown (on a 22-yard pass from Brett Favre in a 35-13 Southern Miss defeat of Virginia Tech on September 17, 1988).

Jackson caught two passes for 34 yards in the defeat of Florida State.

In the All-American Bowl, Jackson caught four passes for 116 yards.

After Southern Miss, Jackson headed to the NFL to continue his football career. 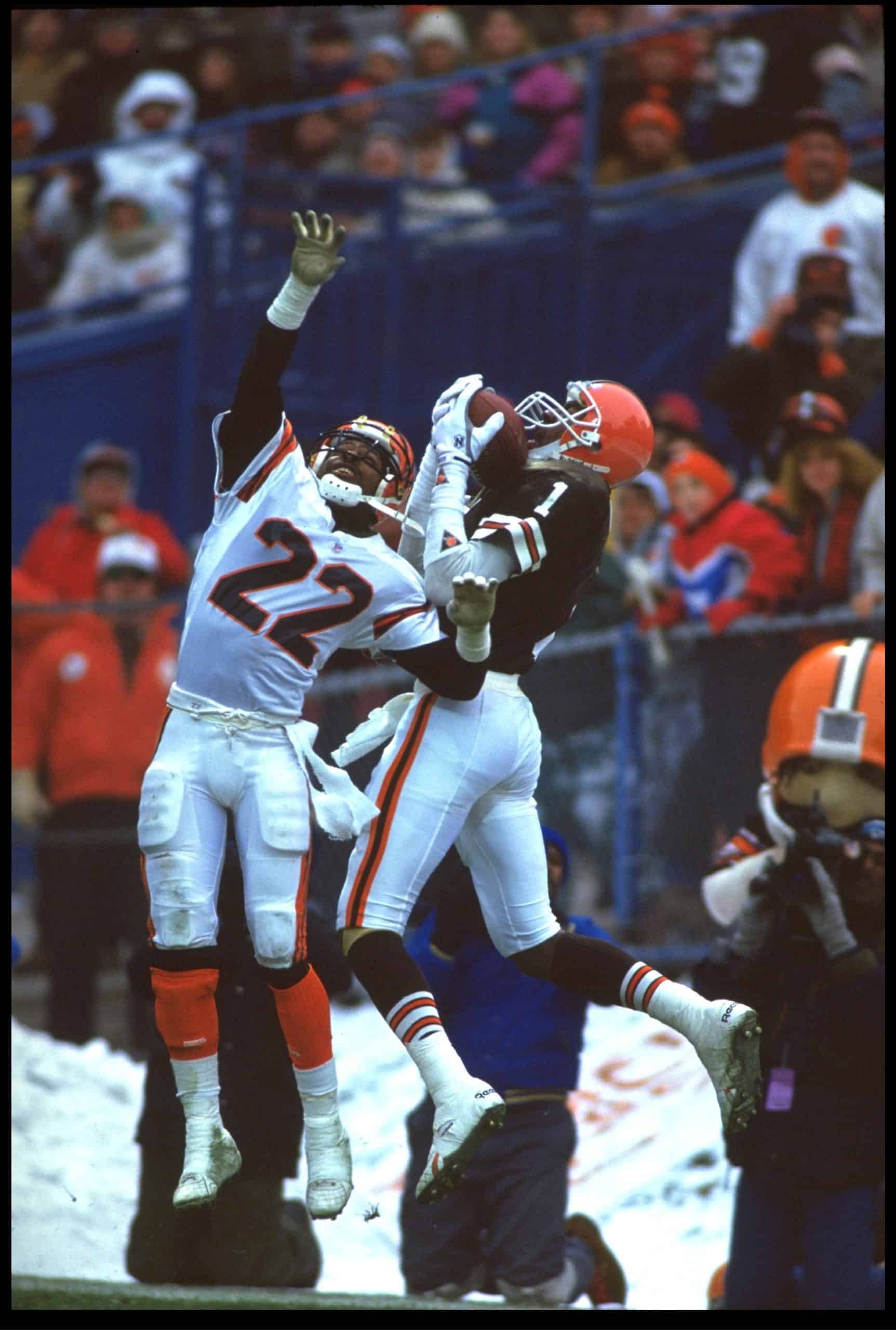 In heading to the NFL, Jackson did not expect to be selected in the 1991 NFL draft.

Instead, he thought that he would have to sign with a team as a free agent.

When the Cleveland Browns drafted Jackson in the sixth round of the 1991 NFL draft, as the 141st overall pick, Jackson was surprised.

“I thought it was my guys playing a joke on me, because I didn’t think I was going to be drafted. I thought I would just get offers as a free agent to go somewhere. I think I hung the phone up the first time; I thought it was some of the guys that were at the training facility where I was. Then they called back, and it was the realization that it was really happening. Michael Lombardi and Ozzie [Newsome] were the two that called me.”

Ozzie Newsome’s scouting of Jackson was instrumental in the Browns drafting Jackson.

“One of my most rewarding achievements after retiring as a player was watching Michael Jackson develop as a wide receiver. When I joined the Cleveland Browns’ scouting department, my first opportunity to work out receivers involved Michael in that group. I evaluated probably a half-dozen guys, but Michael was the one who stood out to me because of his speed and range. . . . I watched him evolve into an impactful receiver throughout his career.”

Jackson impressed Newsome with his speed when Newsome timed Jackson in the 40-yard dash.

“There were six receivers at the workout. . . . The first time I ran Michael, he was in the low 4.3s – very fast. I didn’t quite believe it and made all six run again and, this time, Jackson was under 4.3, a real rarity. Either way, I knew he was fast, but wasn’t confident that I timed it right. A few weeks later, our quarterbacks coach, Gary Tranquill, went to Southern Miss . . . to work out Brett Favre. While there, he also worked out Michael and timed him in the 40. Gary asked me what I got Michael in, and I said ‘Under 4.3.’ Gary said he did too, but we both ended up turning in low 4.4s, which is still very good. We were finding it hard to believe a guy with Michael’s size could get under 4.3. . . . I liked Michael right away.”

As a rookie in 1991, Jackson (playing at a height of six feet and four inches and at a weight of 195 pounds) played in all 16, and started seven, regular season games.

Was watching old @Browns games over the weekend and loved this @BernieKosarQB dime to the late Michael Jackson against the Patriots. #BringsBackMemories #BernieCouldDealYall pic.twitter.com/u00gMJg2FI

For the 1991 regular season, Jackson caught 17 passes for 268 yards and the above-described two touchdowns.

It was in his second year in the NFL that Jackson began to feel like he was a solid NFL wide receiver.

“I went to Southern Miss as a quarterback, so when I got to the league I still hadn’t learned to really be a receiver. My mentality wasn’t at the wide receiver position yet, so I hadn’t become a full-fledged receiver until my second year in the league.”

Generally commenting on Jackson’s development and improvement as a receiver, Ozzie Newsome stated :

“[A]s a player, [Jackson] was very fast, big, and his hands were OK. He could drop his weight and change direction. And, he was charismatic and fun. . . . He then made himself into a good receiver by working on his hands, learning to relax when he caught the ball.”

Jackson caught 47 passes for 755 yards and the above-described seven touchdowns in the 1992 regular season.

There were two developments concerning Jackson before the 1993 regular season that had nothing to do with his performance on the field.

Second, Jackson announced that he was changing his name from Jackson to Dyson – his father’s last name – to honor his father.

He played the first game of the 1993 regular season as “Michael Dyson”.

On this date in 1993, the Cleveland Browns WR formerly known as Michael Jackson announced that he had changed his name to Michael Dyson.

However, supposedly because children who had his autograph as “Jackson” objected to the name change, “Michael Dyson” changed his mind and went back to being “Michael Jackson” for the second game of the 1993 regular season.

It is perhaps somehow appropriate that an NFL player with the same name as the music star known as the “King of Pop” would have a “name change” issue during his NFL career.

For the 1993 regular season, Jackson caught 41 passes for 756 yards and the above-described eight touchdowns.

His 18.4 average yards per pass reception ranked fourth in the NFL in 1993.

In 1994, Jackson only played in nine, and started seven, regular season games.

He missed several games because of injury.

In a 19-14 Cleveland win over the Dallas Cowboys on December 10, 1994, Jackson caught six passes for 74 yards, including a two-yard touchdown pass from Vinny Testaverde.

“He was lot of fun as a teammate. He would tell cornerbacks what pattern he was going to run, and they never believed him. Then he’d do it and beat them. He was big and long, not afraid to go after the ball, even across the middle. He was respectful in the huddle and then have smart suggestions on the sideline, explaining what he was seeing and how we could beat the coverages. He was reliable, really, everything a quarterback would want.”

Jackson caught 21 passes for 304 yards and two touchdowns in the 1994 regular season.

On January 1, 1995, the Browns met the New England Patriots in a playoff game.

In the first quarter, Jackson caught passes of 27 yards and 12 yards on a Cleveland drive that led to a field goal.

Jackson caught passes of 18 yards and 11 yards in the second quarter on another Browns drive that led to a touchdown.

In the third quarter, Jackson caught passes of 14 yards and four yards on a Cleveland drive that led to a touchdown.

Cleveland advanced to play the Pittsburgh Steelers in a playoff game on January 7, 1995.

Jackson caught three passes for 47 yards, but the Browns lost to Pittsburgh 29-9.

Cleveland’s 1995 season was disrupted by the announcement by Browns owner Art Modell on November 6, 1995 that he was moving the franchise to Baltimore for the 1996 season.

While the Browns lost six of their final seven games in 1995 after the Modell announcement, Jackson continued to play well for Cleveland.

On December 24, 1995, in Jackson’s final game as a member of the Cleveland Browns, he caught seven passes for 130 yards, including a 39-yard touchdown pass from Vinny Testaverde, as the Browns lost to the Jacksonville Jaguars 24-21.

For the 1995 regular season, Jackson caught 44 passes for 714 yards and the above-described nine touchdowns.

In 1996, Jackson headed to Baltimore as part of the “relocated” Baltimore Ravens team.

Starting all 16 regular season games for Baltimore in 1996, Jackson had his best NFL season, as he caught 76 passes for 1,201 yards and 14 touchdowns (which tied for the NFL lead).

During one stretch of nine consecutive games in 1996, Jackson scored at least one touchdown in eight of them.

He caught 69 passes for 918 yards and four touchdowns in the 1997 regular season.

For the 1999 season, Jackson signed as a free agent with the Seattle Seahawks.

However, Jackson failed to make the team.

At age 30, Jackson’s NFL career was over.

Jackson was married to Vanessa.

He had three children, LaToia, Michael, and Malik.

After retiring from the NFL, Jackson returned to his hometown of Tangipahoa, Louisiana.

In Tangipahoa, Jackson operated a nightclub and a music production company.

“We are a ‘Third World’ district here, and no attention is being brought to it. It’s time to make this a better place.”

In 2007, Jackson ran for the state legislature in the district that included Tangipahoa.

“The only way I can help you is if I am your first-round pick on Oct. 20. I have to be drafted by the people.”

While Jackson lost his election for the state legislature, he subsequently was elected as mayor of Tangipahoa.

On May 12, 2017, Jackson was killed in a motorcycle accident in Tangipahoa.

The above statistics ignore an important point.

If not for the move by the Browns to Baltimore after the 1995 season, Jackson likely would have played all eight of his NFL seasons with Cleveland.

If Jackson’s statistics in his three years with the Ravens are added to those that he accumulated while with the Browns, Jackson generally significantly rises in Browns career receiving statistics.

Jackson did not play for Cleveland from 1996 to 1998 for reasons that had nothing to do with him; he did not suffer a career-ending injury, leave in free agency, or retire, after the 1995 season.

Instead, he left Cleveland because his team’s owner decided to move to a new city.

The feelings that many Browns fans have when they recall Art Modell’s decision to move the franchise from Cleveland to Baltimore are anger and hate.

Perhaps other feelings should be appreciation and regret – appreciation for the solid play of Michael Jackson as a member of the Browns and regret that Cleveland fans could not have enjoyed his receiving ability for three more years.

3 Free Agents That Should Interest The Browns In 2022

What We Learned In The Season Finale Of ‘Building The Browns’

The Life And Career Of Matt Stover (Complete Story)