The votes are in!

After close to a month of voting and delegation by Cleveland Browns fans, a new field design is finally chosen.

the people have spoken 🏟 pic.twitter.com/TYOBd59So8

The new design features a Browns’ classic helmet logo, an AFC logo and an emboldened “BROWNS” in each endzone.

It also features a picture of Brownie the Elf running the ball and reaching out for a stiff arm in the middle of the field.

The vote for the new design ran from July 30th to August 27th.

Some fans caught an early, birds-eye view of the logo, sharing what they found a day before the team’s official announcement.

Saw this on FB a little earlier…Elf on the 50 confirmed!! #Browns pic.twitter.com/xFE24Rs0UQ

Even if some Browns fans missed the vote, at least everyone gets to enjoy looking at a new design this season.

In total, there were four different designs fans could have voted on.

The designs are not drastically different.

The biggest difference between the different designs is the center field logo.

And as it’s been stated above, the running Brownie the Elf won the vote.

Why the team called for fan votes

On the reason for getting the fans involved in a new field design vote, Browns Partner JW Johnson said:

“With all they do for us, we want to show our appreciation by giving them the ability to select one of four fantastic field designs for all home games this season.”

For a team with one of the best fan bases in the nation, a vote like this feels fitting.

“Everything we do throughout the year will be Browns fan-focused and this is simply one of many opportunities we have to get their direct feedback to accomplish that important goal.”

In a video released by the official Browns Twitter account, fans saw Browns players casting their own votes.

We wanted to get the players' opinions on the field design poll and they're digging the old school! 🏟

If you haven't already, submit your vote now!
🗳 https://t.co/RawSQfJ7vP pic.twitter.com/tedstWBvwP

As surprising as it might be, the players also decided on the running Brownie the Elf logo.

Some of the players that specifically voted for the new design included Sione Takitaki, Michael Woods II, Martin Emerson Jr. and D’Ernest Johnson.

Knowing that the players also like the design makes it feel that much more fitting for the new season.

Hopefully, the new design will bring the team some luck, too.

But given the Browns just won their first opener since 2004, they might not even need it. 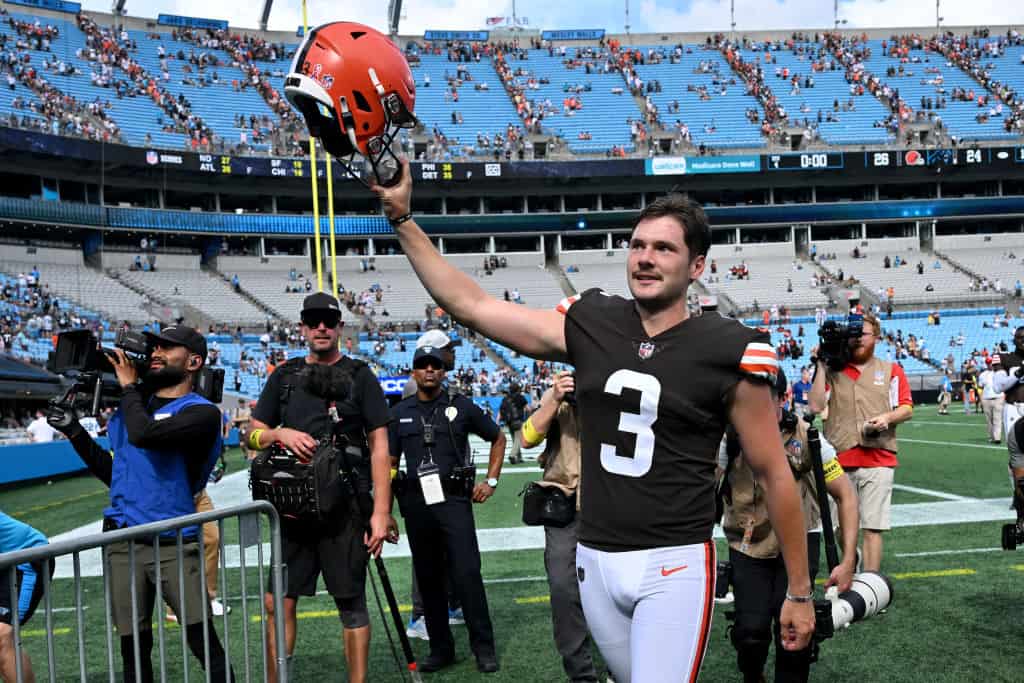