He had the ball with plenty of time to run a game-winning drive against the Green Bay Packers.

Not only would it have been a major NFL upset over a team vying for the top overall playoff seed.

But it also would have put Cleveland in a position to steal the tight AFC North division title.

#Browns HC Kevin Stefanski on @afternoon923FAN on whether Baker Mayfield could ever step on field again: "I think the term we've said all along is 'fluid'. We're going to continue to try to work this every single day. For me and for us, I'm just going to deal with it day-to-day."

Instead, Mayfield threw a pair of bad passes before a controversial interception secured the defeat.

Cleveland was all but eliminated from playoff contention before their next game kicked off.

Mayfield admitted he had a bad game, with 3 other interceptions leading to all of Green Bay’s touchdowns.

But according to Jake Trotter of ESPN, the Packers game was when Mayfield lost confidence in Kevin Stefanski, too.

By late December, Kevin Stefanski’s play-calling was a legitimate source of questions and frustration.

His weekly concession speeches were predictable and vague.

Indeed, Nick Chubb was enjoying another fine rushing day only to be shelved with the game on the line.

On the very first drive of the game, D'Ernest Johnson ran the ball 4 times for 58 yards (14.5 YPA). The #Browns ran the ball just 3 more times in the entire rest of the 1st half.

It's time to have an uncomfortable conversation about Kevin Stefanski's play-calling.

And on the third, Mayfield tried to hit Donovan Peoples-Jones while the defender had his hands all over him.

Cleveland only needed a field goal and had time to run the ball if they wanted.

But it could be called deflection to blame the play calls when the execution was so bad.

Did The Team Have Confidence In Mayfield?

By the time the Christmas game played out, the Odell Beckham Jr drama had died down.

But residual damage in the locker room is suspected of lingering right through the season.

Teammates openly said they would take Beckham back.

And one said he didn’t need to see the Beckham Sr video because he saw it every day in practice.

One hand washes the other: Baker is significantly injured, I have to wonder if that's affected Kevin Stefanski's play-calling this season. Last year when healthy, it was a symphony. There's a year of tape, yes, but something's missing and I wonder if it's health.

When asked, players said they saw Mayfield’s toughness and drive as he battled through injuries.

But the word “confidence” was not mentioned by anyone.

And their support was questioned by the body language of teammates during games.

For example, in the first Pittsburgh game, Mayfield took a hard, late hit and nobody came to him or got fired up.

What About The Interceptions

Mayfield ignored a wide-open Jarvis Landry crossing in front to throw to a double-covered Peoples-Jones.

Landry threw a hand in the air to show he beat his receiver deep only for Mayfield to throw to his back shoulder.

Then he overthrew Landry under a rush that led to poor foot position.

And finally, the slant with the missed holding call that ended the game.

They were not the only missed throws Mayfield had during the day.

Green Bay’s film review mentions the Packers knew some of the plays involved as their schemes are similar.

But it seems silly to blame the play calling when you don’t use the second option and execute the calls poorly. 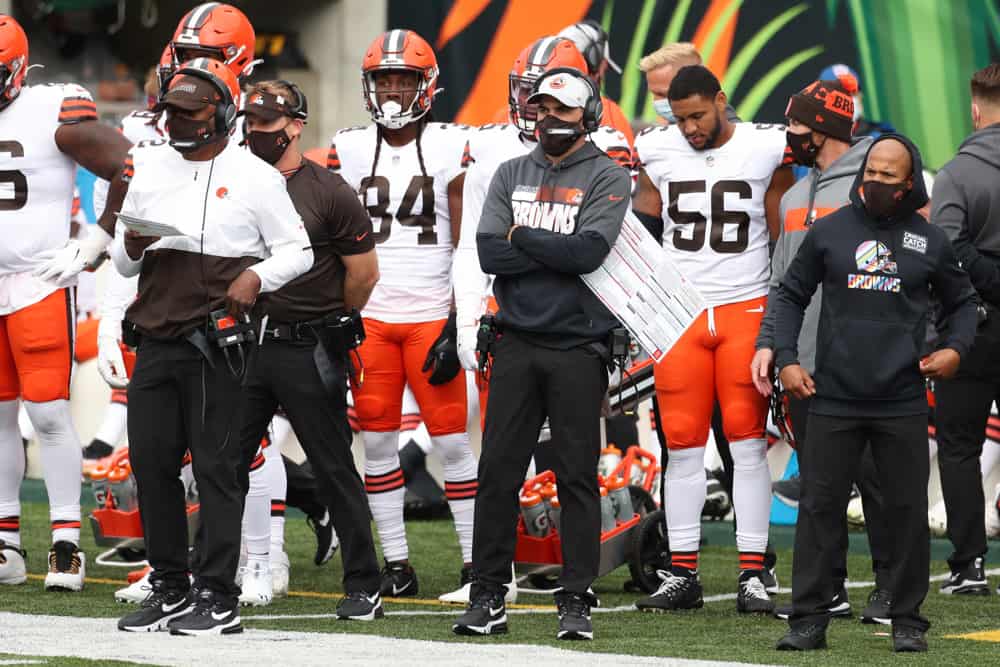 3 Reasons To Be Excited About New Kicker Cade York