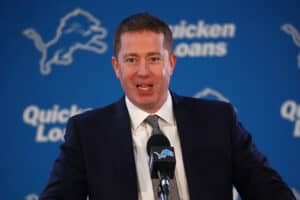 Players are not the only ones who move around during the offseason in the NFL. Front office executives change scenery too. On Friday, it was announced that former Detroit Lions General Manager Bob Quinn is joining the Cleveland Browns as a senior consultant. https://twitter.com/RapSheet/status/1421086221372170240   Background Lions fans on social … END_OF_DOCUMENT_TOKEN_TO_BE_REPLACED