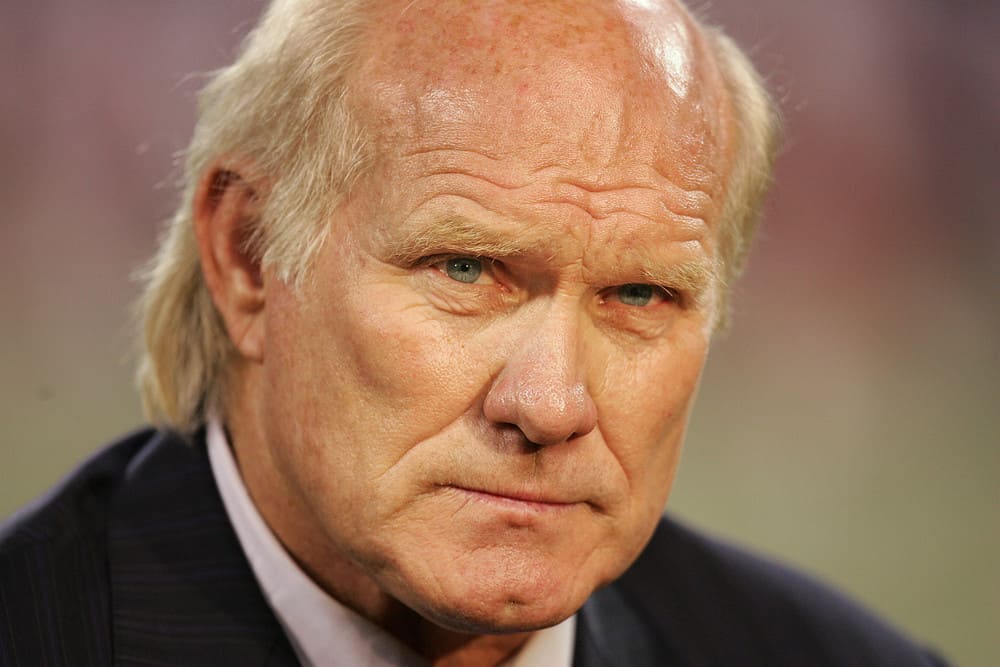 Along with good company and good food, families will sit in front of their televisions to watch football.

For decades, Thanksgiving and football have gone hand-in-hand.

The holiday has long signaled a bounty of college and professional games which includes the Detroit Lions as one of the participating teams.

The Thanksgiving season is also a time to look back and reflect.

Families remark how grateful they are to be together and marvel at what has transpired over the previous year.  It’s also a time for sports fans to remember holiday gridiron battles of the past.

One recollection that is conjured this time of year with Browns fans centers on a turkey.

No, not a deceased, stuffed bird that graces the family table.

No, in this case, we remember Joe “Turkey” Jones.

Jones’ claim to fame did not happen on a Thanksgiving weekend.

However, he is still remembered for taking down an opposing quarterback of one of Cleveland’s biggest rivals during a ‘must-have’ game.

We take this time to look back fondly at the career of Turkey Jones and, specifically, his biggest moment as a pro.

College and the Birth of a Nickname

Joseph Willie Jones was born on January 7, 1948 in Dallas, Texas.

He grew up in the heart of football country and eventually made his way to Tennessee State University to play college ball.

After a respectable college career, Jones was selected by the Browns with the 36th overall pick in the second round of the 1970 NFL draft.

It is rumored that Jones’ memorable nickname came about as a Cleveland rookie.

Former teammates claim that the moniker was bequeathed when Jones was the subject of a prank pulled by Browns veterans.

As the story goes, some of these wily vets convinced Jones that there were various farms outside the greater Cleveland area that were giving away free turkeys for the upcoming holidays.

Jones was dispatched to track down said turkeys and return them forthwith to the Browns facility.

Eager to show his new teammates that he could secure the gratis birds, Jones scoured the countryside.

He finally gave up searching after many hours, long after the other Browns rookies gave up their search.

Not realizing he was being duped, Jones fell for the same prank the following year.

Joe “Turkey”Jones. Got the nickname from veterans when they sent rookies to get a “Free Turkey” for Thanksgiving. Not only did he fall for the fake turkey run, but he fell for it again in his 2nd year.

However, there also happens to be a number of former college teammates who claim they gave Jones the nickname while at Tennessee State.

According to his Tiger pals, Jones got the name because he bobbed his head like a turkey when he ran.

He started eight games in 1971, but was sidelined by a knee injury for the entire 1972 season.

In 1973, Jones started all 14 games and was a consistent member of the Browns defense.

Despite the fact that he was a valued member of the team, Cleveland traded Turkey to the Eagles before the 1974 season.

However, the Eagles chose to cut Jones during the season and he was quickly reunited with the Browns.

1976 and “The Incident” with Bradshaw

In his second stint with Cleveland, Jones saw limited action for the remainder of the 1975 season.

Fortunately, he clawed his way back into the starting lineup for 1976.

As the season progressed, Jones’ success was overshadowed by the Browns’ ineptitude.

This Day: 11/21/1976
With Thanksgiving approaching…known better as "Turkey" & for slamming Bradshaw to the turf-here's DL Joe Jones w/ only TD of his career-a fumble recovery of Steve Spurrier (Heisman winner|FL Gator HC). 44 yrs ago #Browns win 24-7 vs TB, Bucs go 0-14 that yr pic.twitter.com/xdiCokG8wc

By the time Week 5 rolled around on October 5, the team was 1-3 and looking at a losing season.

It wasn’t a stretch to say that, if the team laid another egg in ‘76, he might be out of a job.

The prospect of turning the season around didn’t look good heading into Week 5 when the Browns faced the Steelers.

Pittsburgh was fresh off a Super Bowl victory following the 1975 season.

However, the defending champs were having a difficult ‘76 season.

By the time they pulled into the parking lot of Cleveland Stadium, Pittsburgh was also 1-3 (their lone victory came at the hands of Cleveland in Week 2).

Not long after the start of the contest, fans could see this was going to be another knock down, drag-out battle of heavy weights.

The Steelers Terry Bradshaw and Browns starter Brian Sipe were frequently upended by the opposing defense.

Cleveland’s Don Cockroft put the first points on the board with a 43-yard field goal in the 1st quarter.

Pittsburgh’s Franco Harris put the Steelers on top with a one-yard plunge near the end of the quarter.

Cockroft kicked another field goal in the second quarter and the Steelers Roy Gerela kicked a 30 yarder to increase the Pittsburgh lead 10-6.

Sipe was eventually knocked out of the game with a concussion during the first half and did not return.

Rookie quarterback Dave Mays piloted the team for the remainder of the game.

In the 3rd quarter, Cleveland put the wood to their rivals and running back Cleo Miller dove over from the one to retake the lead (although Cockroft missed the point after).

Cockroft redeemed himself later in the quarter by making a 50-yard field goal to increase Cleveland’s lead to 15-10.

Meanwhile, according to former sports writer Hal Lebovitz, Jones was having probably his best game as a Brown.

His constant pressure on Bradshaw, and sure tackling, was helping to keep the Browns in the game.

Cockroft kicked his fourth field goal of the game in the final quarter to put the score at 18-10.

Then, as the Steelers were driving shortly after, Jones found himself in the middle of a controversy.

After the ball was snapped, Jones beat Pittsburgh tackle Larry Brown and had a bead on Bradshaw.

As he wrapped the quarterback in a bear hug, the whistle blew to end the play.

However, Jones either did not hear the whistle or ignored the whistle (according to Steelers fans).

He picked up Bradshaw and threw him to the turf.

Bradshaw remained on the ground and ended up being carted off the field.

Join me in watching the Cleveland Browns attempt the legal assassination of Terry Bradshaw for a minute. The piledriver Terry absorbs from Joe “Turkey” Jones at 0:30 may be the defining play of 70s football … pic.twitter.com/jqPH7eH9gV

Bradshaw had also left the field when he sustained a neck injury early in the 4th quarter.

He returned to the game when X-rays taken at the stadium showed no damage.

After the Jones hit, however, Bradshaw stayed down.

The result of the play was a 15-yard unnecessary roughness call on Jones.

Rookie Mike Kruczek took Bradshaw’s place and led the Steelers the rest of the way.

Not long after the quarterback switch, Kruczek found receiver Lynn Swann for a 45-yard reception.

Then, Kruczek scrambled 22 yards for a touchdown.

Gerela’s PAT was blocked and the Browns lead was cut to two, 18-16.

That would end up being the final score as Jones and the Cleveland defense held Kruczek and the Steeler offense for the remainder of the 4th.

After the game, the Pittsburgh faithful vilified Jones for knocking their beloved quarterback out of the game.

However, many media members as well as several Steelers players did not think Jones’ hit was egregious.

Pittsburgh center Mike Webster admitted he had not heard the whistle before Jones’ hit.

“Throwing him down was just a freak accident. Terry (Bradshaw) has a tendency to bust tackles like that and run for a gain.”

Browns beat writer Chuck Heaton said, “Jones was assessed 15 yards for unnecessary roughness on the play, but it seemed to be a questionable call.”

The following day, Jones was interviewed and he expressed his remorse about the play and wished Bradshaw a speedy recovery.

“I’m sorry it happened,” Jones said.  “I hope he’s OK. I hate to see any quality player like Terry Bradshaw get hurt. We’re all in this game trying to make a living.”

The outcome of the game seemed to spark both teams.

The Browns only lost two more games the rest of the season and just missed the playoffs with a 9-5 record.

Despite the loss, the Steelers reeled off nine straight wins, five of which they blanked their opponent.

They would eventually lose the AFC Championship game to the Raiders 24-7.

Jones played two more years in Cleveland, starting every game in 1977 and six games in 1978.

He was released by the team a second time after the ‘78 season and signed with Washington.

In two years with the Redskins, Jones started only three total games.

He retired following the 1980 season.

Although his stats may not put him in the pantheon of Cleveland greats, Jones’ contribution to the Browns was long lasting.

For one afternoon at least, Turkey made a name for himself that will be remembered with fondness for many Holidays to come.