You are here: Home / Daily News / Cris Collinsworth Criticized For What He Said About Baker Mayfield 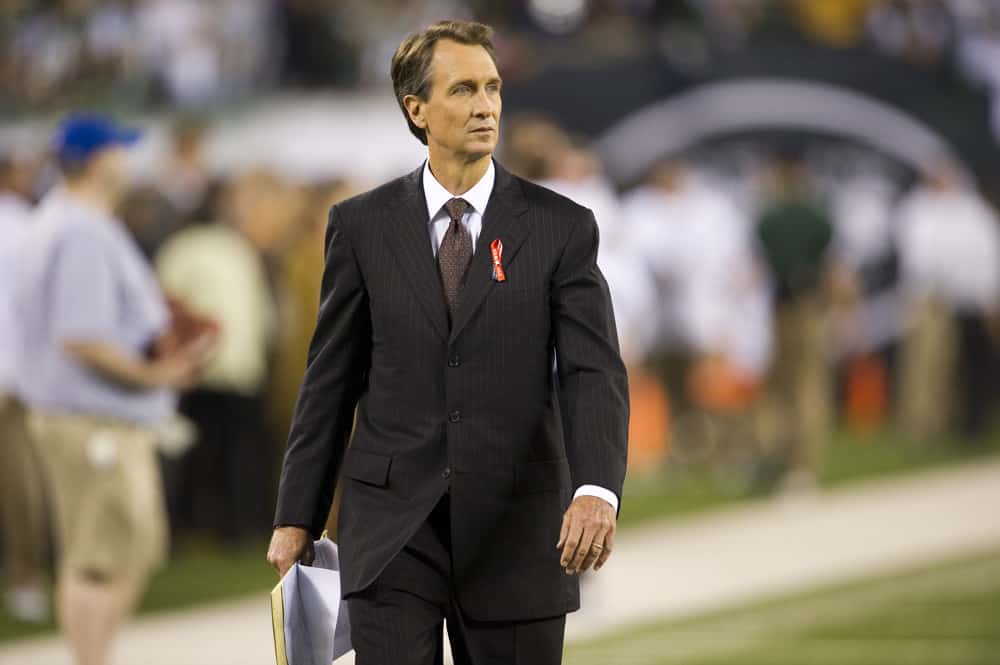 Baker Mayfield has been especially sharp the past few weeks for the Cleveland Browns.

Because Baker Mayfield is such a polarizing figure, Collinsworth’s comment was met with ire on social media.

Cris Collinsworth thought the angle of Baker’s lead foot and leg in a slightly pigeon-toed and bowlegged stance was reminiscent of John Elway’s.

By the Numbers: Baker Mayfield's accuracy reaches another level

He went on to talk about how other quarterbacks tend to point the lead foot forward while releasing the ball.

Collinsworth was not suggesting that Mayfield was comparable to Elway as a quarterback, just his footwork.

But social media lit up like a Christmas tree in response taking Collinsworth’s comment out of context.

nah, i don't know what you mean when you say baker mayfield throws kinda like john elway, cris collinsworth.

Stats Comparison Between Mayfield and Elway

In the midst of the social media firestorm, someone decided to compare the stats of Mayfield and Elway and came up with this.

Someone mentioned John Elway and Baker Mayfield, so we got to thinking 🤔

Elway vs Mayfield through 43 career games:

What is evident is that Elway struggled in the early parts of his career; he was considered a late bloomer.

And Mayfield’s struggles up to this year are well documented.

In that respect, their careers are trending similarly.

In its context, Cris Collinsworth’s comment addressed the change in Baker Mayfield’s footwork.

Much of that is attributed to Mayfield’s offseason work with Browns offensive coordinator Alex Van Pelt.

Van Pelt helped Aaron Rodgers with his footwork while serving as the Packers quarterback coach from 2014-2017.

Besides his work with Rodgers, Van Pelt is a former quarterback so he has plenty of credibility in this area.

Leading with the left foot was a key point that Van Pelt emphasized with Mayfield in offseason Zoom meetings.

#Browns Baker Mayfield said on a Zoom call that the change in his footwork (leading with left foot) that Alex Van Pelt has requested is going well, starting to become second nature.

When asked about the proposed footwork changes in February, the always entertaining Van Pelt said:

“I want the feet to be like Mozart and not like Metallica. With the footwork, it’s just a fluid motion. You’re really back there dancing through the pocket as you go through your progressions…I have a belief and a philosophy of footwork, and it’s extremely important to me — Kevin as well. It all starts with the feet. The feet never lie. They get you through your progressions. So just some of the ways that we’ll have him drop both from under center and in the [shot]gun will change slightly to help him.”

Here’s what everyone can agree on.

Collinsworth’s comment should be taken at face value; it is an observation on his stance and footwork.

It is also true that Mayfield is having the best season of his career.

Is it attributed to maturity, fitness, the supporting players and coaches, or technique changes?

It’s probably all of the above.

The Browns face the New York Jets on Sunday for their second consecutive week of playing in MetLife Stadium.

Pittsburgh comes to FirstEnergy Stadium on January 3 for the regular season finale.

The Browns need Mayfield to continue his high level of play in these games and through the postseason should the Browns make it to the playoffs.