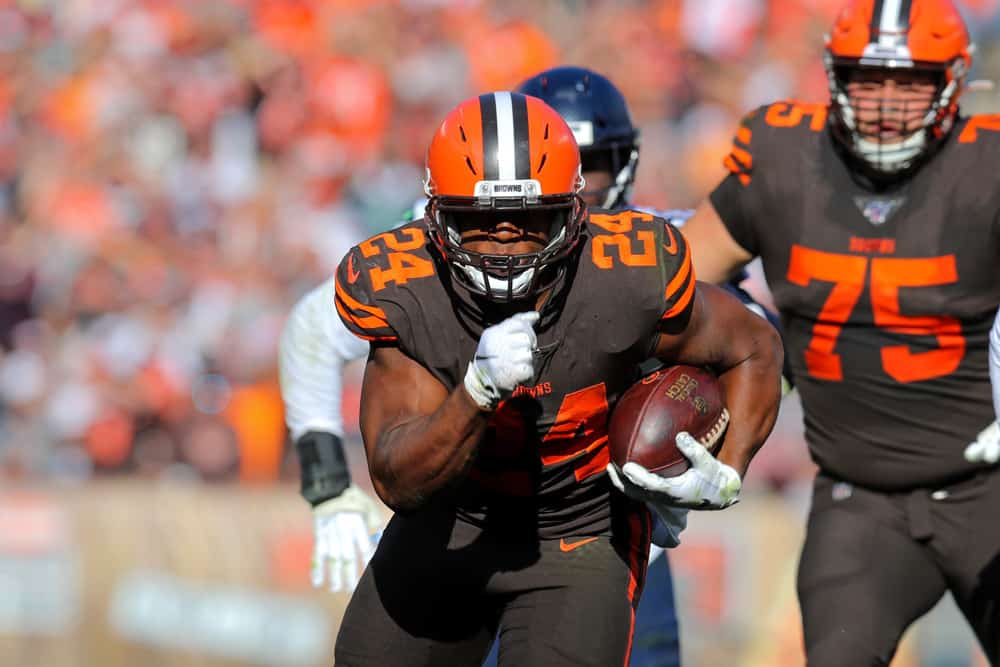 For the second straight year, Cleveland Browns RB Nick Chubb is the Browns’ nominee for the Art Rooney Sportsmanship Award.

Each of the 32 teams nominates a player that represents what Art Rooney stood for.

That is on-the-field sportsmanship and fair play.

A panel of former players narrows down the candidates from 32 to 8 (4 from the AFC and 4 from the NFC).

The panel consists of the following retired NFL players:

The final 8 candidates are then listed on the NFL Pro Bowl ballot under the NFL Sportsmanship Award category.

Players choose the winner as they cast their Pro Bowl votes on December 18.

The winner is announced during the NFL Honors show traditionally held the night before the Super Bowl.

The NFL Foundation donates $25,000 to the winner’s charity of choice.

Chubb is universally loved by his teammates, coaches, and the organization.

“He’s a man of few words. Even less than me…I love how Nick Chubb works. You see him on the grass and you see him in the classroom, he is all ball all the time. He is a good person. He is a solid citizen. He is a great teammate. Pleased with what Nick means to this team.”

It’s no surprise that Chubb was voted the quietest member of the 2019 Browns squad.

His play on the field speaks volumes.

This play will show you what kinda guy chubb is. If that’s me, I’m taking 6 😂 https://t.co/vGGP0Okjnx

Chubb is geared up for a big Sunday game against the Tennessee Titans.

The only running back more dominant than the Nick Chubb and Kareem Hunt combination is Tennessee’s Derrick Henry.

Henry edged out Chubb to win the 2019 rushing title.

.@NickChubb21 will finish 2nd for the Rushing Title.

Asked this week if losing the rushing title to Henry bothered  him, Chubb answered:

“I haven’t really thought about it. I’m not really focused on anything that has to do personally with me…It’s nothing personal against him. It’s more of just myself. I am not mad at Derrick Henry for getting the rushing title last year.”

“I think (not getting the rushing title) bothers everybody else besides Nick Chubb, just to be quite honest.”

And that, ladies and gentleman, describes Nick Chubb perfectly.

He is motivated to achieve for his team and is not as caught up in the individual stats.

This is one of the many reasons he is beloved in Cleveland and is deserving of the Browns’ team selection for the 2020 Art Rooney Sportsmanship Award.

Will Deshaun Watson Be The Cure The Browns Need?

2 Keys To A Browns Victory Over The Bills