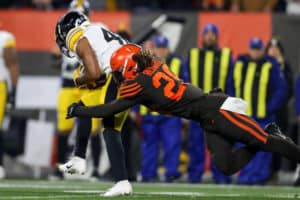 Safety Sheldrick Redwine and wide receiver JoJo Natson are among the players the Cleveland Browns are expected to release before the start of the 2021 regular season. NFL teams must trim their rosters down from 80 players to 53 by 4 p.m. ET Tuesday. “I think they are all tough decisions,” head coach Kevin Stefanski said Monday. “You look across the roster and I … END_OF_DOCUMENT_TOKEN_TO_BE_REPLACED

The Cleveland Browns secondary has not been what fans hoped it would be this season. Sure, there have been bright flashes. However, Denzel Ward has had some bad weeks, such as the second Pittsburgh game. Greedy Williams has shown why he is still a rookie. Damarious Randall, despite excellent play at times, has found himself at the center of controversy numerous … END_OF_DOCUMENT_TOKEN_TO_BE_REPLACED