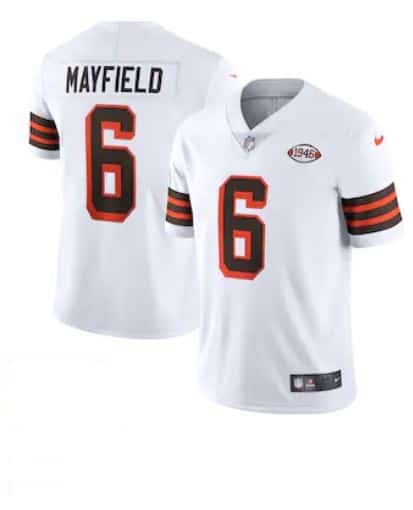 By now, everyone has seen the 75th-anniversary limited use Cleveland Browns jerseys after the big social media reveal on July 24.

As part of the jersey reveal, Haslam Sports Group President and Browns Partner JW Johnson described the design in a press release.

“The Browns are one of those iconic franchises in all of sports, not just the NFL. We really wanted to give a nice nod to the past and the players that have paved the way for the team we have here today. It’s just a nice thank you to them for everything they’ve done for this league and for this team and for this city.”

The Cleveland Browns have unveiled their 75th anniversary uniforms.

The @Browns wore identical uniforms during their inaugural season in 1946.

The next logical question is where to buy them?

Here are a few locations where you can purchase one.

Fanatics.com is a great place to get the anniversary jerseys on sale now.

Stocked and ready! 😤
▪️open from 10 am to 5pm
▪️free poster with purchase
▪️download the app to get a picture on the field #Browns pic.twitter.com/mGoUOLzSnN

If you live in the Cleveland area, the Browns Pro Shop at FirstEnergy Stadium is fully stocked with all of the 75th-anniversary memorabilia.

This includes the official jersey and helmet as well as t-shirts, sweatshirts, hats. etc. that bear the anniversary logo and theme.

Select sporting goods stores may also have stock in store or online depending on where you are shopping from.

These would include Dicks Sporting Goods and Nike.

This is not a comprehensive list but a good starting point for you in your quest to purchase a 75th-anniversary jersey or other related memorabilia.

Though jerseys can be customized, there are specific players’ jerseys already available for purchase.

OBJ Is Saying All The Right Things Leading Into Training Camp