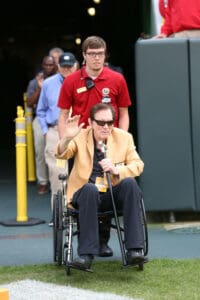 Forrest Gregg is a name synonymous with winning football. He was a 15-year vet with the Green Bay Packers and Dallas Cowboys who helped lead the Packers to five NFL championships and the first two Super Bowls. https://twitter.com/DanKramerPhotos/status/1482014794244886529 Gregg also helped the Cowboys win Super Bowl VI in his final season. Gregg was … END_OF_DOCUMENT_TOKEN_TO_BE_REPLACED

The Cleveland Browns have had many outstanding running backs who have led the team in rushing yards in a season. From Pro Football Hall of Famers Jim Brown, Leroy Kelly, and Marion Motley to such other excellent players as Kevin Mack, Earnest Byner, Greg Pruitt, Mike Pruitt, and Nick Chubb, Cleveland has a long history of talented running backs who have led the … END_OF_DOCUMENT_TOKEN_TO_BE_REPLACED

A defensive back can help his team win games in many ways. He can intercept passes, recover fumbles, have sacks, and limit passing and rushing yards by the offense. Over an eight-year career with the Cleveland Browns from 1965 to 1972, defensive back Mike Howell helped Cleveland win games in all of these ways. With Howell (who earned All-Pro honors in 1969), … END_OF_DOCUMENT_TOKEN_TO_BE_REPLACED

The stereotype is that Ivy League football players will not be successful in the NFL. One player who proved this stereotype wrong was Calvin Hill. After starring at Yale University, Hill had an excellent professional football career, including 12 seasons with the Dallas Cowboys, Washington Redskins, and Cleveland Browns. A running back who could run, catch, … END_OF_DOCUMENT_TOKEN_TO_BE_REPLACED

In the long history of the Cleveland Browns, one of the most important seasons was 1950. In 1950, the Browns had their first season in the NFL and won their first NFL championship. An important contributor to Cleveland’s success in 1950 was Rex Bumgardner. Rushing the ball and catching passes, Bumgardner helped the Browns win several games in 1950, including … END_OF_DOCUMENT_TOKEN_TO_BE_REPLACED