You are here: Home / Browns History / The Life And Career Of Carmen Policy (Complete Story) 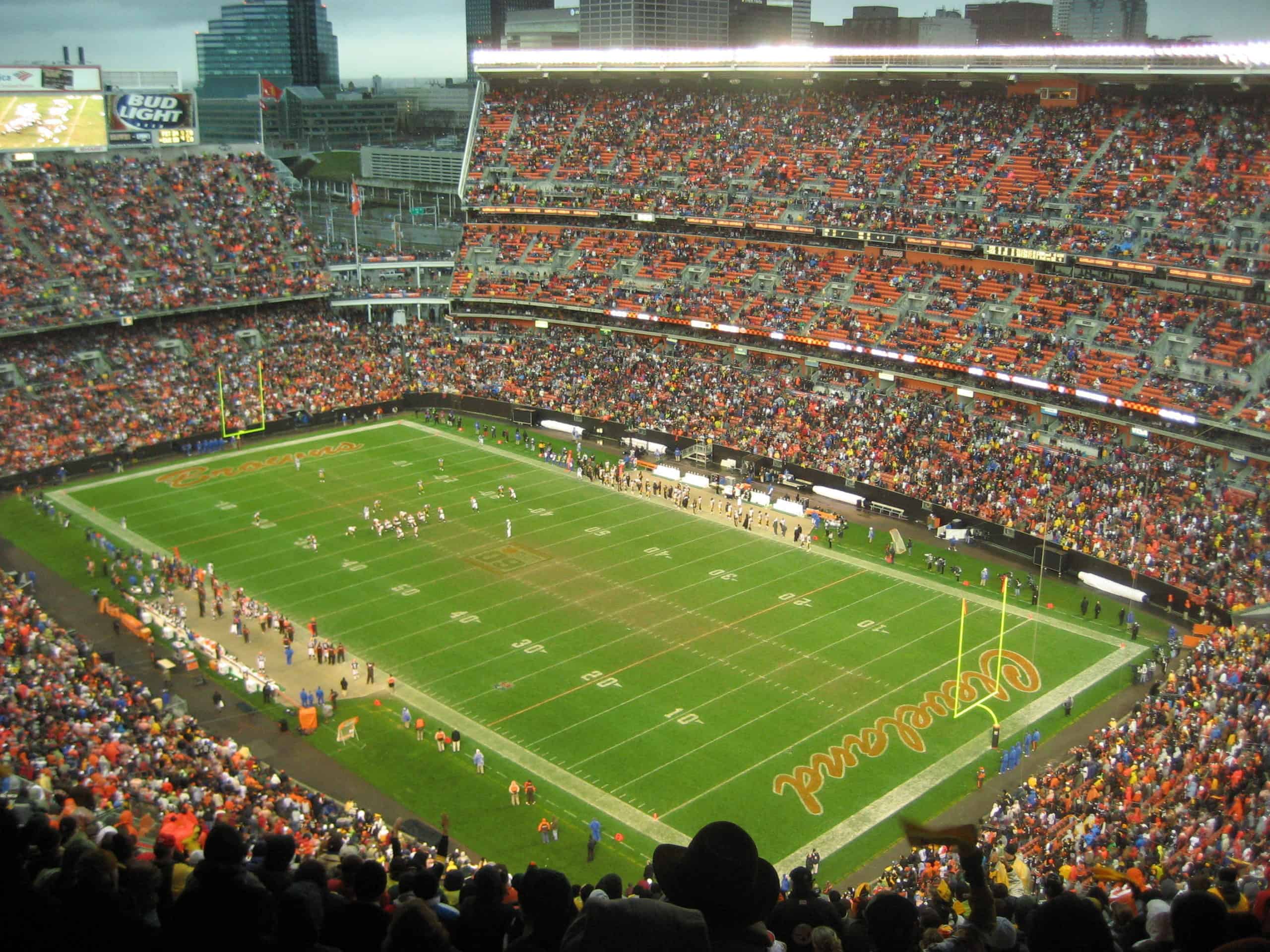 In professional sports, the players get all of the glory.

Rarely do fans know the names of the front office people.

The general manager may find his name in the news because of a stroke of genius free agent move.

Or, they may be in the news due to all the wrong reasons.

The Browns have had their fair share of notable front office people.

Paul Brown comes to mind as the first head coach and GM in the team’s history.

Bill Belichick coached and served as the GM in the early 90s.

Even John Dorsey gets a little credit for drafting and building the current iteration of the Browns.

Another name that is sometimes overlooked is Carmen Policy.

Policy served as the Browns President and minority owner from 1998-2004.  Before his time in Cleveland, Policy helped build one of the greatest dynasties in NFL history.

He grew up in Youngstown and was attracted to Ohio sports.

By the time he finished college at Youngstown State University, the law was another interest.

It wouldn’t be long before he found himself meshing together both sports and the law.

After a decade or so of law practice, first as a Youngstown prosecutor and then private practice, Policy was hired by the 49ers to be their legal council to owner Eddie DeBartolo Jr. in 1981.

He had done some legal work with DeBartolo before being officially hired.

In 1983, he was officially named vice president and general council.

By then, the Niners were beginning to strike gold.

Due to savvy drafting, the nucleus of their future success was being assembled.

Quarterback Joe Montana and receiver Dwight Clark were drafted in 1979.

In the next few years, running backs Roger Craig and Tom Rathman and receiver Jerry Rice were added to the team.

They helped San Francisco to another title in 1985.

Carmen Policy had a fantastic interview on @KNBR. Here’s transcript of the 49ers stuff http://t.co/jE9VdMDPDy pic.twitter.com/FtoLefZZEk

That marked the first time an NFL team won back-to-back world titles since the 1978-79 Steelers.

The organization nearly “three-peated” in 1991, but were knocked out of the playoffs by a tough New York Giants team.

In 1994, Policy was named the NFL’s Executive of the Year by The Sporting News and Pro Football Weekly.

The Sporting News as well as GQ magazine also named Policy one of the “Most Influential People in Sports.”

Policy showed why he was the top NFL executive that year.

In a rather surprising move, San Francisco traded Montana after the 1992 season.

In his place stepped his former backup, Steve Young.  By the time Montana left, it was clear that Young could lead the Niners.

However, by 1994, the team had yet to win a championship with him.

Policy and DeBartolo got to work bringing in help for Young before the ‘94 season.

Even more impressive, Policy accumulated these assets despite a new league-wide salary cap instituted before the 1993 season.

The result was a 13-3 record and a 49-26 spanking of the San Diego Chargers in Super Bowl XXIX.

It was the fifth title for the franchise during Policy’s tenure.

Really looking forward to this one! The architect behind 4 of the 49ers Superbowl championships, Carmen Policy will be our guest on #SportsAdrenalineLV! Tune in Saturday morning from 8-10 on @SportsRadio1140, the @Radiodotcom app, or on our FB live simulcast! pic.twitter.com/EUtFAHWZw3

He has been recognized by former colleagues and peers as one of the main reasons the 49ers dynasty lasted so long.

“Carmen played a critical role in the 49ers’ success during their record-setting Super Bowl years,” former NFL commissioner Paul Tagliabue said. “He provided visionary leadership and delivered forthright, wise, and consensus-building counsel. In his uniquely charming way, Carmen was fiercely competitive and protective of his beloved team and the city of San Francisco.”

“Carmen was one of my best friends before my family thought of buying the 49ers,” DeBartolo said. “He began as one of the most unheralded executives in the NFL.  However, two former Commissioners Pete Rozelle and Paul Tagliabue, have acknowledged that he was one of most knowledgeable and respected executives the NFL ever had. The franchise would never have been the same without him. You can’t put a dollar value on how important he was to me, not only with the 49ers but as a friend whom I trusted with my life.”

Initially, Policy had no plans to leave San Francisco.  Ensconced in perpetual success, there was no reason why he would go elsewhere.

However, he couldn’t help but notice the fiasco brewing in his home state around 1995.

That’s when Browns owner Art Modell decided to up stakes and move the franchise to Baltimore.

It pained Policy to see a team he had grown up watching move to another state after 50 years of existence.

As talk of Cleveland adding a new version of the Browns came to light in 1998, Policy worked together with Al Lerner to make it happen.

Policy was listed as a minority owner alongside Lerner in their pitch to bring the Browns back to Cleveland.

In October of ‘98, the NFL announced that Lerner and Policy’s ownership group would lead the expansion franchise.

Before he knew it, Policy was now officially a member of the Browns.

At first, Lerner and Policy wanted to start their new team in 2000.

However, the NFL pushed to get the team back into the fold in 1999.

With only nine months to prepare, they assembled their new coaching staff and began the scouting process.

Policy was aided in the process by former 49er turned executive, Clark, who was hired by Lerner around the same time he hired Policy.

The duo eventually hired Jaguars offensive coordinator Chris Palmer, who had never been a head coach on any level.

In the 1999 NFL Draft, the Browns had the first overall pick and, after vacillating back-and-forth between Kentucky’s Tim Couch and Oregon’s Akili Smith, selected Couch.

The team also drafted Syracuse wide receiver Kevin Johnson with the 32nd pick of the first round.

The NFL held an expansion draft that year to help fill out the Cleveland roster.

Policy and Clark added 37 bodies through the draft with center Jim Pyne (formerly with Detroit) and Antonio Langham (former 49er who also played with the Browns from 1994-95) as the only notable names.

Predictably, the new look Browns mustered only two wins in their inaugural year including an upset win over division rival Pittsburgh in Week 10.

Before the 2001 season began, the team hired former University of Miami coach Butch Davis to be their new head coach.

Their record was good enough to get them into the playoffs where they faced off against the Steelers.

By the end of the third quarter, the Browns had their rival on the ropes, 24-14.

However, Pittsburgh reeled off 22 points in the final quarter and defeated Cleveland 36-33.

On May 4, 2004, Policy decided to step down as President and minority owner.

His overall record with Cleveland (26-53) wasn’t as rosy as his 49ers record.

“I am ready to leave the Browns because it’s the right time pursuant to the right plan, and by the way, a plan that I designed,” Policy said.

Life After the Browns

After stepping down from the Browns, Policy dabbled here and there with the NFL.

In 2015, he was hired by the San Diego Chargers and Oakland Raiders to help lead their quest in building a stadium in Carson, California.

Then in 2019, Policy was asked to help arbitrate an ongoing dispute concerning the ownership of the Denver Broncos.

When he’s not the NFL’s go-to guy in settling disputes, Policy and his wife, Gail, have operated Casa Piena Wines from their vineyard in Yountville, California.

Their specialty wine is a Cabernet Sauvignon.

After nearly three decades of service in the NFL, life is good for Policy.

The Life And Career Of Bob Golic (Complete Story)