You are here: Home / Browns History / The Life And Career Of Matt Stover (Complete Story) 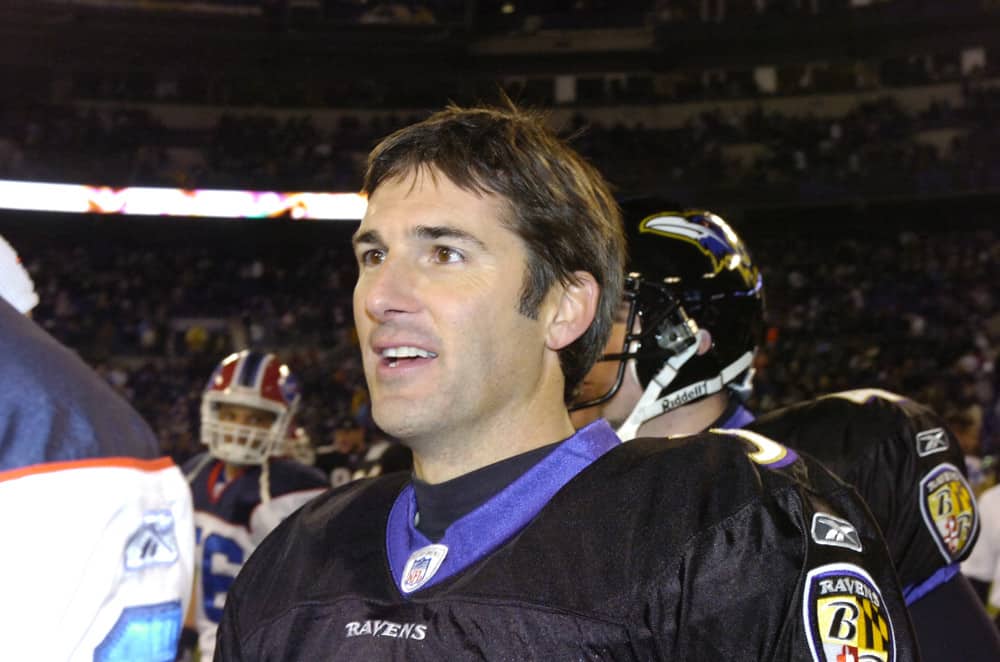 The life of a kicker in the NFL is filled with “the thrill of victory and the agony of defeat” moments.

For 19 NFL playing seasons, kicker Matt Stover regularly delivered “the thrill of victory” for his teams.

While Stover’s Browns career was prematurely ended when the franchise relocated to Baltimore, his outstanding performance over his five seasons with Cleveland still makes him one of the best kickers in Browns history.

We take a look at the life of Matt Stover – before, during, and after his NFL playing career.

Stover grew up in the “Lake Highlands” neighborhood in Dallas.

Football was important to Stover even at a young age.

“Ever since the first grade, football was a big part of my life. When I was eleven, I was a Punt, Pass & Kick champion. . . . The dream of my life was to become a professional football player.”

At Lake Highlands High School, Stover was a wide receiver, a kicker, and a punter.

Stover won All-District honors as both a wide receiver and a kicker.

Stover was a four-year letterwinner at Louisiana Tech from 1986 to 1989.

For his play in 1986, Stover made the All-Southland team.

Louisiana Tech (playing in the Southland Conference) posted a 6-4-1 record in 1986.

It was the longest field goal in Louisiana Tech history.

In 1987, Louisiana Tech (then playing as a Division I-AA independent) had a 3-8 record.

Louisiana Tech had a 4-7 record (again playing as a Division I-AA independent) in 1988.

For his play in 1989, Stover made the All-South Independent team.

In discussing the importance of his time at Louisiana Tech for his subsequent NFL career, Stover stated:

“That all goes back to college and the experience I got against some big-time teams as we made the move up to Division [I-A]. Because I kicked all four years, my learning curve and experience from big games taught me a lot about the kind of pressures I would handle for years in the NFL.”

During his career at Louisiana Tech, Stover made 64 out of 88 field goal attempts.

For part of his time at Louisiana Tech, Stover also punted.

“To me, he’s the best kicker of all time on either the college or pro level. . . . [H]e made some big kicks for us – some long kicks. . . . But his best attribute was his consistency. Accuracy was never a problem for Matt. . . . For a kicker, and I don’t say it loosely, Matt was very intense and passionate about the game. His success came from that intensity and the fact that he was willing to do whatever it took to get his mind and body right. He was one of the best players – let alone kickers – under pressure I’ve ever seen or been around.”

After graduating from Louisiana Tech in 1990, Stover continued his football career in the NFL.

Stover was drafted by the New York Giants in the 12th round of the 1990 NFL draft.

He was the 329th overall pick.

Although the Giants won Super Bowl XXV after the 1990 season, Stover was on injured reserve (because of a quadriceps injury) and did not play in any regular season or playoff game.

On March 15, 1991, Stover signed as a free agent with the Cleveland Browns.

For Stover, signing with Cleveland and its new coach in 1991, Bill Belichick, was a key moment in Stover’s football career.

“Belichick I owe my career to. I know he wasn’t really liked in Cleveland, but as he’s proven he’s a pretty darn good coach. . . . I’ll say this, Bill had a plan, and I was a part of that craziness.”

In 1991, Stover (playing at a height of five feet and 11 inches and at a weight of 180 pounds) became the kicker for the Browns, playing in all 16 regular season games.

On September 1, 1991, Stover scored his first NFL regular season points, as he kicked two extra points, in a 26-14 Browns loss to the Dallas Cowboys.

On September 15, 1991, Stover kicked the winning field goal from 45 yards with four seconds left in the game, as the Browns defeated the Cincinnati Bengals 14-13.

After the game, Stover stated:

“If you don’t want to kick that football to win the game, you shouldn’t be a place-kicker. You’ve got to go out there and tell yourself that you want this kick.”

Stover again played in all 16 regular season games in 1992.

In 1993, Stover again played in all 16 regular season games.

Stover made 16 out of 22 field goal attempts and all 36 extra point attempts in the 1993 regular season.

Stover again played in all 16 regular season games in 1994.

In the 1994 regular season, Stover made 26 out of 28 field goal attempts; his 92.9% field goal accuracy percentage led the NFL.

He also made all 32 extra point attempts.

In describing the 1994 season for the Browns, Stover stated:

“The 1994 team, we really found ourselves, all the hard work had really paid off. We had a good, good formula, offensively we were good to a point, and defensively we were very strong. 1994 was the NFL’s 75th anniversary, too, I recall that being a big deal, and we had a patch on our jersey, and that’s the jersey I actually have framed in my basement. I have a big picture of my pointing up, I always pointed up good or bad, and it’s of me in my Browns jersey in that 1994 season.”

Cleveland played the New England Patriots in a 1994 playoff game on January 1, 1995.

Stover kicked two field goals, from 30 yards and 21 yards, and two extra points, as the Browns defeated the Patriots 20-13.

Cleveland then advanced to a 1994 playoff game against the Pittsburgh Steelers on January 7, 1995.

Stover kicked a 22-yard field goal, but the Browns lost to Pittsburgh 29-9.

In 1995, Stover again played in all 16 regular season games.

For the 1995 regular season, Stover made 29 out of 33 field goal attempts; he ranked third in the NFL with an 87.9% field goal accuracy percentage.

During the 1995 season, Cleveland owner Art Modell announced that he was relocating the franchise to Baltimore for the 1996 season.

The “old Browns” were to become the Baltimore Ravens in 1996.

Stover’s third extra point against Jacksonville on December 24, 1995 was the last point scored by the Cleveland Browns in their original form.

In recalling the move from Cleveland to Baltimore, Stover said:

“That was horrible. The Cleveland Browns moving? You’ve got to be kidding me. I had a very good year in 1995. I think I was alternate to the Pro Bowl. So I didn’t let it affect me professionally. Personally, it affected me because I had a brand new baby. And we had just gotten pregnant again in the middle of that season, and we had to go to Baltimore. I had just signed a new contract in August. They’d signed all those players so that when they did move, they would have to go with them. In October, I went, ‘Omigosh.’ It was a four-year deal. When we were negotiating in August my wife did say, ‘You should have a no-move clause in there.’ My wife has these intuitions. Me and my agent laughed.”

Stover ultimately had an outstanding career over 13 seasons in Baltimore with the “old Cleveland Browns/new Baltimore Ravens” team.

Stover was invited to the Pro Bowl and named first team NFL All-Pro in 2000.

He was also named first team All-Conference by the Associated Press, Pro Football Weekly, the Pro Football Writers of America, and Sporting News.

Stover was named second team All-Conference by the Associated Press in 2006.

The Ravens won Super Bowl XXXV after the 2000 season.

Stover signed as a free agent with the Indianapolis Colts during the 2009 season.

Stover was the last member of the “old Cleveland Browns” to play in the NFL.

After his NFL retirement, Stover has been involved with various charitable-related activities.

Stover was a co-founder of the Players Philanthropy Fund.

Great evening tonight with @Ravens and listening to Matt Stover @PlayersPhilFund speak at the stadium. My fav Browns/Ravens player. Happy my son Myles could meet him. pic.twitter.com/aQ5o0ElOLx

“Players Philanthropy Fund (PPF) is a 501(c)(3) public charity that enables athletes, entertainers, corporations and individuals to create a dedicated fund that can accept tax-deductible contributions in support of any qualified charitable mission. . . . PPF’s vision is to empower philanthropists through sound best-practiced-based philanthropic education, facilitation and inspiration to make a positive impact on causes and communities in need.”

"I am proud to have played 18 NFL seasons with the @browns/@ravens. 14 of those seasons, Art Modell was the owner. I am grateful to have played in two wonderful cities with amazing fans." Matt Stover, Co-Founder of PPF pic.twitter.com/1XM48rxewV

Stover has also been active with the Matt Stover Foundation, which does charitable work in the Baltimore community, including with programs that benefit underprivileged children.

In 2011, Stover was inducted into the Louisiana Tech Athletic Hall of Fame.

Even though Stover was a member of the Cleveland Browns for only five seasons, he still ranks high in Cleveland career regular season kicking records.

While Stover spent most of his career in Baltimore, his longest NFL regular season field goal was the 55-yard kick he made with Cleveland in 1991.

Any review of Stover’s career with Cleveland must take into account the move by the Browns to Baltimore in 1995.

Had the Browns stayed in Cleveland, and Stover’s statistics that he accumulated from 1996 to 2008 been accrued for the Browns rather than the Ravens, Stover generally would rise to the top of Cleveland career regular season kicking records.

In terms of Stover’s contribution to team success, it should be noted that Phil Dawson did an outstanding job “replacing” Stover as kicker for the “new Cleveland Browns”, beginning in 1999.

The Life And Career Of Reece Morrison (Complete Story)