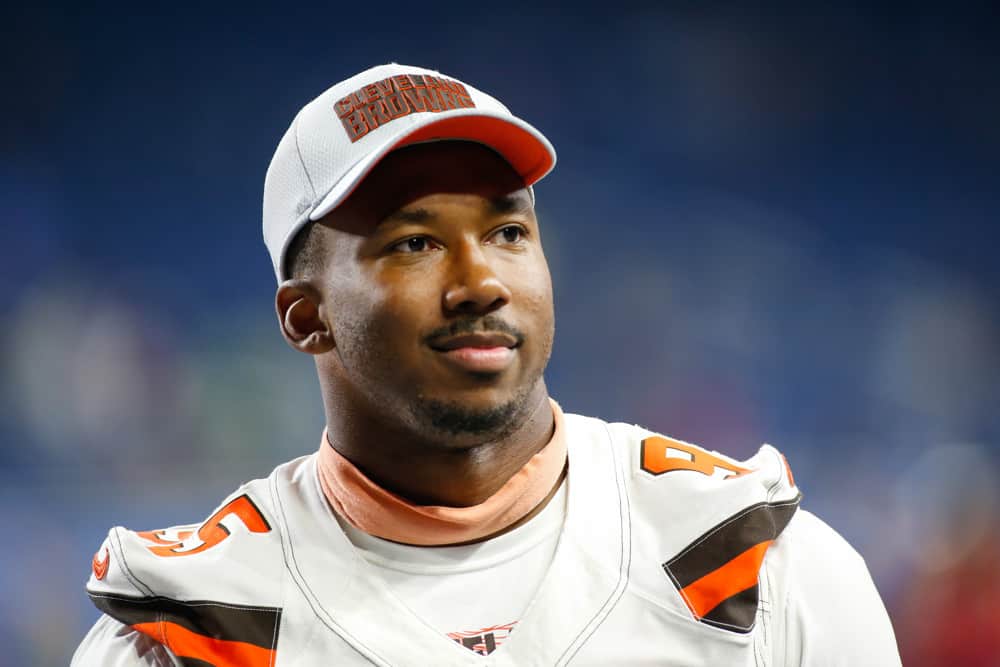 Myles Garrett worked through some self-induced challenges after his nationally-televised meltdown last season.

But he knows he’ll never face the challenges many Africans face when it comes to finding drinking water.

Thanks for shedding light on the strictly player driven initiative that Myles has been a part of since his rookie year. @WaterboysORG is lucky to have him, and I know he’s excited to get back to work!! https://t.co/ru5le72uOy

As far back as high school, Garrett talked about bringing clean drinking water to poor communities as a life goal.

When Long retired from the NFL, he tapped Garrett to take over as NFL player captain of Waterboys.

.@MylesLGarrett to take over as player captain for Chris Long Foundation’s @WaterboysORG

This week, Garrett is in Tanzania with other Waterboys members and supporters.

To bring awareness to their well-digging efforts, the group hikes Mount Kilimanjaro every year.

At 19,380 feet, Kilimanjaro is Africa’s tallest mountain and happens to be in Tanzania.

First Tanzania trip with my @waterboysorg team has been an absolute blessing. I finally got a glimpse of the impact our organization has made on the communities of this region, and I can’t wait to show you guys how much of a difference we can make. pic.twitter.com/Bkw19OaXz9

Besides the annual hike, Garrett’s group visited some well sites and took in a quick safari in the Serengeti.

But Garrett’s job is not all fun and games.

Garrett was named captain of the NFL’s Waterboys just prior to the 2019 season.

Several other NFL players also take part in the effort to raise money for the wells.

Our team of #ConqueringKili players, vets, and supporters have touched down in #Tanzania and are prepping for the climb. But not before making some time for a safari in the Serengeti and stopping for a visit in the Simanjiro village to check in on one of our Waterboys wells. pic.twitter.com/OjqJqXUJxL

Chris Long’s original goal was to dig 32 wells, one for each NFL team, in East Africa.

They surpassed that goal in February of 2018.

With 83 wells now in the ground, Garrett hopes to lead the group toward its new goal of 1 million people served.

Supporters like you demonstrate what it means to be generous with others. Thanks to you, we've helped over 360,000 people obtain the gift of clean water. Together, we will bring water to one million people! pic.twitter.com/O1OsKISDLk

They have quite a ways to go, but Garrett is passionate about increasing the pace of the effort.

Garrett already works with Hoops2O, the NBA’s version of Waterboys.

He also extended invitations to figures from soccer, golf, and other sports.

Fans who tagged three friends with the hashtag #dawgsdigdeep last season were entered into a drawing for free game tickets.

How Important Are These Wells?

Garrett’s job is to prompt financial commitments for new wells.

But he also wants to induce people to visit Tanzania.

All smiles on day two of #Waterboys On Safari. #ConquerKili pic.twitter.com/hd9MbHYYyB

That is the best way to realize how each new well impacts community life.

Millions of women walk miles each day to find water for cooking, drinking and even bathing.

To assure that enough water is retrieved, most young girls accompany their mother on the hours-long hike.

This means they are not attending school.

By putting wells in the immediate community, the girls have time to go to class.

Mothers have time to hone new skills and partake in income-producing activities.

In the villages surrounding Kilimanjaro, lack of clean water access means waterborne illnesses are rampant. Your generosity is changing that, and lives, for the better. pic.twitter.com/3pywa2Yp7o

That is on top of reducing the 20-percent death rate of children under five years old due to water-related illnesses.

How Do They Work?

Waterboys pays local workers to dig the bore-holed wells in each community.

Most are solar-powered and require regular maintenance.

Men and women from each community are trained to provide that work for their own well.

Tanzania’s Ministry of Water helps identify communities that benefit from the wells.

Waterboys is one of several organizations working with the Water and Development Alliance (WADA).

WADA is a USAID and Coca Cola Company partnership aimed at developing communities, economies, and strong environments around the world.

Thank you to everyone who supported our first #HometownH2o water project in Suffolk, VA. Because of your generosity and our partners @XylemInc @GouldsWaterTech @waterwelltrust we were able to provide water to the Crawford family, allowing them to move back home. #Water2OneMillion pic.twitter.com/DwE4Wji0tp

Myles Garrett has a personal fund-raising page accessible here on the Waterboys’ website.

You can connect with other pages or go directly to Waterboys.org for more information on Myles Garrett’s new passion.