Jason Bales is an avid sports enthusiast. He has been writing professionally in the sports and sports betting industries since 2012. In 2016, he earned his B.A. degree in philosophy from Albright College, and in 2019, he earned his M.A. degree in the same subject from West Chester University. Not only has his education provided him with excellent writing skills, but his unique philosophically-informed stance toward sports analysis leans heavily on analytic reasoning and critical thinking. 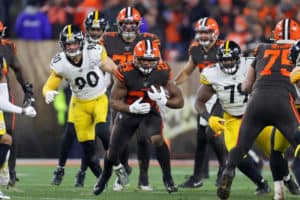 The world is watching, as the Cleveland Browns travel to Heinz Field to square off against bitter, in-division opponent the Pittsburgh Steelers. Two weeks ago, Mason Rudolph and Myles Garrett partook in an on-field altercation that eventually led to a rest-of-the-season suspension for Garrett. Rudolph is no longer the Steelers' starting quarterback, but for … END_OF_DOCUMENT_TOKEN_TO_BE_REPLACED 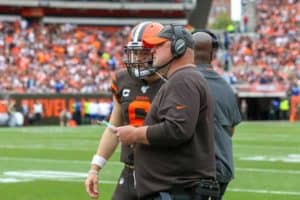 After the physical on-field altercation between Mason Rudolph and Myles Garrett two weeks ago, many suspect the Cleveland Browns and Pittsburgh Steelers' rivalry is back in full swing. To the media, Mike Tomlin admitted that the Steelers' last game against the Browns felt more like some of their previous matchups against the Cincinnati Bengals and Baltimore … END_OF_DOCUMENT_TOKEN_TO_BE_REPLACED 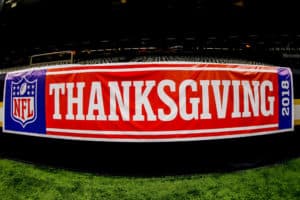 The holidays are finally here! Regardless of what our readers celebrate, we hope everyone gets to spend quality time with their families and enjoy the upcoming football games. The Cleveland Browns are taking the day off to be with their families. Freddie Kitchens and company need to wind down and recharge for their upcoming game against the Pittsburgh … END_OF_DOCUMENT_TOKEN_TO_BE_REPLACED 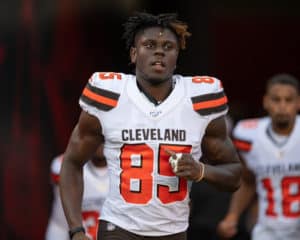 Entering the 2019 season, David Njoku was expected to be a large part of the Cleveland Browns offensive game plan. Week 1, against the Tennessee Titans, he ran 30 routes, Baker Mayfield targeted him 6 times (once in the red zone), and Njoku caught 4 passes for 37 receiving yards and a touchdown.  In Week 2, after running only 4 routes and getting targeted 1 … END_OF_DOCUMENT_TOKEN_TO_BE_REPLACED 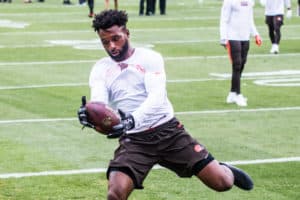 Last Sunday, the Cleveland Browns defeated Jarvis Landry’s former team, the Miami Dolphins, by 17 points. Landry led the team in targets (13), receptions (10), receiving yards (148), and touchdowns (2). Odell Beckham Jr., like he has done in many games this season, trailed Landry, landing in second on the team in all of those categories.  Landry ended Sunday’s contest … END_OF_DOCUMENT_TOKEN_TO_BE_REPLACED