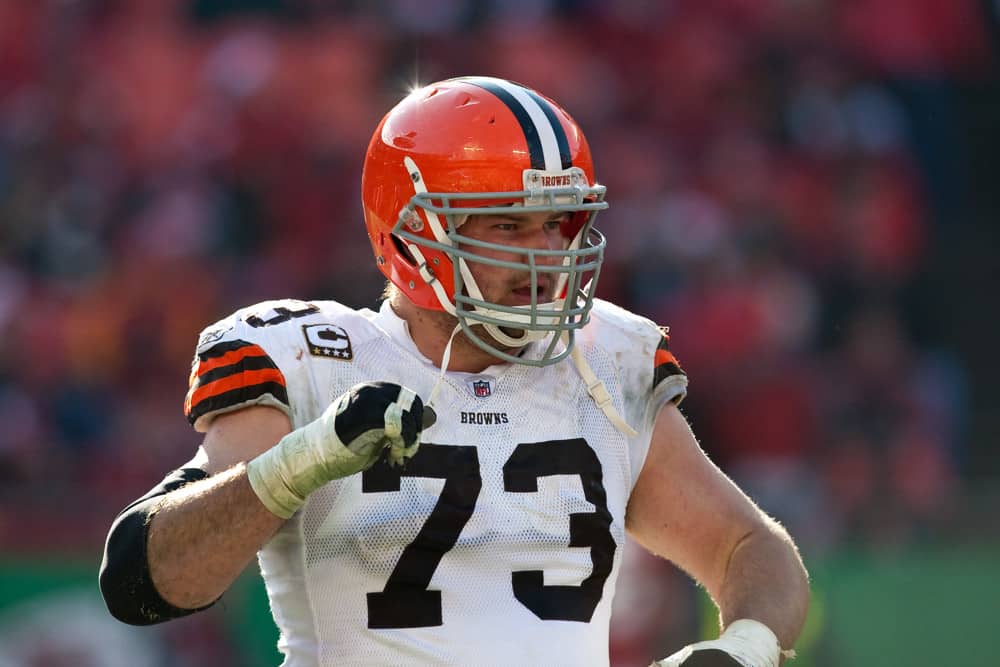 The Cleveland Browns have seen some truly special players suit up for them throughout their history.

One of the best players to ever put on a Browns uniform is left tackle Joe Thomas.

Three of the top 10 season grades we've ever given to a tackle belong to one man.
See you in Canton Joe Thomas, an all-time great.

Pro Football Focus released their top 101 players of the last decade, which features Thomas near the top of the list.

Thomas was ranked 11th in the overall rankings, but he hasn’t played a game since the 2017 season.

He is ranked as the top offensive tackle of the last decade, which he is well-deserving of that accolade.

Thomas was taken as the third overall pick in the first round by the Browns during the 2007 NFL Draft.

He was known as being the gold standard for pass protection ever since he stepped onto an NFL field.

During the decade, Thomas held a pressure rate of 3.9%, which only Andrew Whitworth surrendered a lower rate in that time span.

Thomas held three straight seasons with a PFF grade of above 90.0, but sadly the Browns quarterbacks weren’t as talented as him.

Cleveland was never able to make the playoffs throughout his 11 seasons with the Browns.

Thomas made the Pro Bowl 10 out of the 11 seasons that he played in the NFL.

The only season he didn’t make the Pro Bowl was his final year in 2017 when he only played seven games.

Thomas played all 16 games each season for the first 10 seasons of his NFL career.

He is one of the best players in NFL history and will be in the Hall of Fame one day.

Could Jedrick Wills Be The Next Thomas?

After Thomas retired, the Browns struggled to fill the hole he left at the left tackle spot.

However, the Browns may have found a reliable replacement during the 2020 NFL Draft.

He earned second-team Associated Press All-American and first-team All-SEC accolades during his final season in college.

Wills was arguably the best tackle coming into the draft after his tremendous success at Alabama.

He is expected to be a Pro Bowl type of player for years to come.

Replacing a talent like Thomas is nearly impossible, but the Browns have a great young prospect in Wills.

Wills is not likely going to be as good as Thomas, but that just goes to show how unbelievable Thomas was throughout his career.

Which Other Browns Players Made The Top 101?

Thomas was not the only Browns player to find himself in the PFF top 101.

Center Alex Mack was ranked at No. 44, which is quite high, but not surprising based on his performances.

Mack was drafted as the No. 21 overall pick by the Browns during the 2009 NFL Draft.

He spent seven seasons in Cleveland where he was named to the Pro Bowl three times in that span.

Mack signed with the Atlanta Falcons after the 2015 season, but is known as one of the most reliable centers in the game right now.

Current Browns wide receiver Odell Beckham Jr. is ranked No. 91 on the list.

He was traded to Cleveland in March of 2019 after multiple successful years with the New York Giants.

Beckham finished with 74 receptions, 1,035 receiving yards, and four touchdowns during his first year in Cleveland.

Lastly, offensive tackle Mitchell Schwartz finds himself ranked No. 100 in the top 101 players of the decade.

He was drafted in the second round by the Browns during the 2012 NFL Draft.

Schwartz spent the first four years of his career as a trustworthy tackle on the Browns offensive line.

He went to the Kansas City Chiefs after the 2015 season and remains part of their organization.

All of these players have made significant impacts, but none quite as strong as Thomas has made throughout the last decade.

3 Browns Players Whose Stock Is Down After 2021